With less heat in the immigration debate, attitudes to migrant workers have softened

Heather Rolfe looks at the new Ipsos immigration attitudes tracker results, and finds evidence of pragmatic permission from the public for the government to allow employers to recruit more workers from overseas to fill workforce gaps.

It’s now more than a year since free movement ended and the new, points-based system (PBS) has been in place. The government has navigated a difficult path, sticking to its principles of easing skilled migration and tightly restricting less skilled.

The government has allowed a number of temporary flexibilities to the PBS where serious shortages have emerged, in road haulage and the meat industry. Yet to date only one relaxation, a visa for care workers, has involved lowering the intermediate skills threshold.

The latest immigration attitudes tracker survey, carried out by British Future with Ipsos, finds the public giving pragmatic support for flexibilities to the PBS, including for lower skilled workers. This may continue while vacancy rates are high and unemployment low. However, concerns about skilled migration may start to displace traditional worries about low skilled jobs if promises about levelling up and skills are not delivered.

Attitudes to immigration are more positive than ever

The Tracker also pinpoints the shift in attitudes towards immigration in 2016. On a scale of 0-10 where 0 is very negative and 10 very positive, almost half gave a score of 6-10 in the latest survey, while 29% gave a negative score of 0-4. These figures are a mirror image of those from seven years ago: in February 2015 41% believed the impact of migration to be negative (and just over a third to be positive), yet in 2022 46% believe it to be positive (and under a third to be negative).

For many, control is more important than numbers

The latest migration statistics show a substantial increase in the number of people migrating to the UK for work. While few will be aware of this, the new findings suggest it may not cause them great concern if they did: more than four in ten people think it’s more important that the government has control over who can and can’t come into the country, whether or not that means immigration numbers are significantly reduced. Only a quarter prefer an immigration system that deters people from coming to the UK so that numbers remain low. Reflecting these preferences,  four in ten people (42%) think immigration should be reduced, while half think it should not. At the time of the referendum, six in ten (62%) wanted immigration reduced.

The public values the contribution of migrants

One in five people (21%) say they have become more positive about immigration since the referendum and the survey asked them the reasons for this change of mind. More than half said it was from awareness of the role of migrants in key services such as health and social care during the pandemic. This had particularly influenced older age groups, with two-thirds of people aged over 45 giving this as a reason for their more positive outlook. This is likely to reflect social contact with the sector’s workforce as well as health concerns.

Talking about immigration helps, and getting on for half of people still think we don’t do this enough. Public discussion about immigration since 2016 is given as the second most common reason for an attitude change. 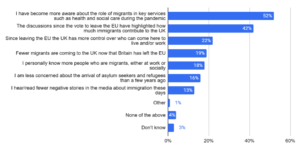 People strongly support migration for work across a range of circumstances

The divergent trends, in which concerns about immigration have declined while those about the economy have increased, are reflected in public attitudes towards policies in relation to immigration for work. On this question, people are very clear that these should meet the needs of employers and the economy.

Should employers be allowed to recruit workers from overseas to fill the following roles? 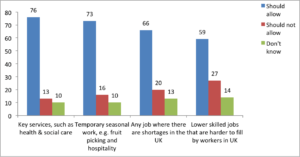 When asked about the circumstances in which employers should be allowed to recruit from overseas, a majority of the public said they should be able to do so in each of the scenarios described below. Roughly three-quarters of the public supports overseas recruitment for positions in key services, such as health and social care (76%). A similarly high proportion of the public supports migration for seasonal work such as fruit picking and hospitality (73%). These two policies are more strongly supported by older than younger people, with more than 80% of those aged over 55 in favour of these options.

Why have attitudes softened – has talking helped?

The story of softening attitudes towards immigration is now well known. It has been explained with reference to the reassuring effect of the end of free movement. Our findings suggest that discussions about immigration, dating from the period leading up to and following the referendum, may have played a role in shifting attitudes, with more people becoming migration ‘balancers’: almost half of people fall into this group, rating the impact of migration as somewhere between 4 and 7 (where 0 is very negative and 10 very positive). Twenty-two percent are ‘sceptics’, rating its impact as between 0 and 3.

For some people, we still aren’t talking enough about immigration, and two-thirds of sceptics say we don’t. To help ensure that everyone has their say, and listens to others, we must keep on talking.

There are also indications that people are more interested in the principles of immigration – control and contribution – and less about numbers. This might be a trend, or something that researchers and policy makers haven’t really appreciated until now.

While it is sometimes thought that the change in attitudes reflects the more liberal views of the young, this applies much less to immigration for work than on other issues such as asylum seekers and refugees. In fact, older people are more likely to support migration for key services and for temporary seasonal work than younger people. Perhaps this reflects greater contact with these sectors as users and workers.

The findings suggest that the government has pragmatic permission from the public to adjust the points-based system reactively to meet shortages. However, just how far they can take this is unclear. Concerns about the economy, which are currently eclipsing those around migration, are likely to find expression in worries about future job opportunities for young people.

While people might be quite relaxed about migrant fruit-pickers and care workers, and support the aim of attracting highly skilled talent to Britain, they will expect to benefit from the promises made for jobs and skills in the Levelling up White Paper. The government and regions will need to strike the right balance between attracting talent to fill labour market gaps, and ensuring that local people, especially younger people, have the skills and opportunities that they need to prosper.