Where is public opinion on refugee protection?

Recent weeks have seen an outpouring of public support across the UK for Ukraine, and for the thousands of civilians fleeing the conflict. Demonstrations have been held in towns and cities around the country. Polling by YouGov in February found three quarters (76%) of people in the UK support taking in refugees fleeing the Russian invasion.

New research released this week, from a survey that has tracked public attitudes to immigration since 2015, shows how this is more than just a short-lived response to harrowing images on the TV news. Public support for refugee protection, while not unequivocal, is a long-standing trend.

The new Ipsos immigration attitudes tracker research with British Future finds that 75% of people agree ‘People should be able to take refuge in other countries, including in Britain, to escape from war or persecution.’ Some 16% disagree. Fieldwork for the survey was conducted from 28 January-10 February 2022, before the invasion of Ukraine and the resulting urgent calls for refugee protection for those fleeing violence.

There is majority support across age groups, political party tribes, leave-remain divides and even among those most sceptical about immigration. And this strong support for the principle of doing our bit to protect refugees is long-standing: the Global Advisor survey found the same in 2019 (72%), 2020 (78%) and 2021 (73%).

More people agree that the UK should have an asylum system that is fair, even if that means allowing more asylum seekers to stay and live in the UK than we do now (46%) than prefer an asylum system that deters people from seeking asylum in the UK (32%). Preference for fairness over deterrence has grown over time, from a 5-point lead in November 2020 (42% to 37%) to 14 points today.

The findings are reflected in the overall shift in the national mood on immigration since the 2016 referendum, with attitudes getting warmer across a range of measures. Our tracker finds that 46% of people feel immigration has a positive impact on Britain, compared to 29% who feel it is negative. Most of us would now prefer not to reduce immigration, with a significant gap emerging between those who choose ‘don’t reduce’ (50%) and the 42% who still want to cut immigration numbers.

That positivity is tempered, however, with concern about the small boats crossing the English Channel bringing migrants to Britain. Most people (56%) have sympathy for people making channel crossings by boat, compared to 39% who say they have little or no sympathy. That basic sense of compassion has stayed steady since the question was first asked in the tracker in 2019. But these dangerous and chaotic boat arrivals are no-one’s idea of a well-managed asylum and immigration system. The failure to address boat crossings is a key reason for public dissatisfaction with the government’s handling of immigration. 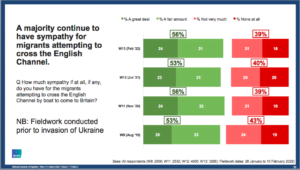 Public dissatisfaction with the way that the government handles immigration is nothing new. It has remained steady across each wave of the tracker survey, from 61% when Ipsos first asked the question in 2015 to 59% today. And of those six in ten who say they are currently dissatisfied, half of them (52%) cite ‘not doing enough to stop channel crossings’ as a reason. Some 41% say ‘allowing too many people to claim asylum’.

Yet this picture, too, is nuanced: at the same time, three in ten people (30%) cite ‘Creating a negative or fearful environment for migrants who live in Britain’ as the reason for their dissatisfaction and 28% say it’s because the UK is ‘not treating asylum seekers well’. Among Labour voters, the top reason given (by 45%) for dissatisfaction with the government’s approach to immigration is the negative way that migrants are treated in the UK.

The tracker also asked people their views on more specific policy proposals regarding immigration and asylum. Here the results were less conclusive, perhaps reflecting both a lack of public awareness and indeed the challenges of finding solutions to complex problems. The Nationality and Borders Bill, currently going through Parliament, would effectively create a two-tier asylum system, whereby asylum seekers who make their own way to the UK are only allowed to stay in the country for a limited time, even if their asylum claim is successful. This clause of the Bill was voted down by the Lords recently but could be reinstated by MPs. The new research finds that only 32% of the public support such a change; but at the same time only 30% oppose it. Some 36% support keeping the current system, whereby people can arrive in the UK and have their asylum claim assessed here, while 27% are opposed. In the polarised political argument about the government’s Nationality and Borders Bill, it seems that neither the government nor its opponents have fully got their argument across to the general public.

Our survey found that nearly half of people (47%) would support efforts to reduce boat crossings by allowing asylum claims to be made from outside the UK, for example by applying for a new type of visa or making an asylum claim at British embassies, while 20% were opposed. More people (68%) would support arrangements with specific countries to ensure a safe return of people whose asylum claim has been rejected.

So the government’s proposals to discriminate between refugees according to how they arrived in the UK generate rather less public support than an approach which would allow asylum claims to be made at UK embassies abroad – while the idea of agreeing safe returns for those whose claims have been rejected has two-thirds support. Only 31% supported expanding UN resettlement schemes back at the start of February, though this was before Russian tanks moved into Ukraine and lines of refugees fled across the borders into Poland and Hungary.

The latest tracker presents a nuanced and somewhat hopeful picture of public attitudes towards asylum and refugees – and a counter to those arguing that the public demands only the toughest approach to people seeking asylum. It is not just the Ukraine refugee crisis that shows how people are more compassionate than some sections of the media and politics would have us believe.

These findings also illustrate why and how an asylum debate that presents a forced choice between control or compassion is a recipe for stalemate. Only around a third of the public are attracted by an approach that prioritises deterrence.  Securing broad public consent for refugee protection will require a system that is orderly, fair and humane. The public don’t have all the answers as to how to achieve this – but most people are not convinced by those being offered by the government, either.