What are Scotland’s choices within the new immigration system?

Scotland has a more liberal immigration discourse than in other parts of the UK, yet it is now subject to the most significant reforms to immigration for several decades, driven by political changes outside of Scotland. Heather Rolfe considers the policy options for Scotland, and the context of shifting public attitudes to immigration in Scotland and across the UK.

When asked in June 2021 by the Ipsos MORI immigration tracker to rate on a 0-10 scale whether they feel that immigration is positive or negative for Britain (with 0 very negative and 10 very positive), around half of people in Scotland give a figure of between 4-7 and only 17% say 0-3. A third rate its impact as very positive –between 8 and 10. 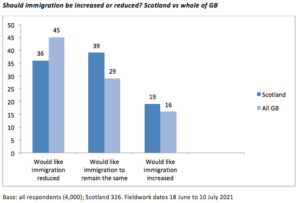 Scots are in favour of a range of measures that would make it easier for employers to recruit from overseas, suggesting the economic case for migration has popular support. 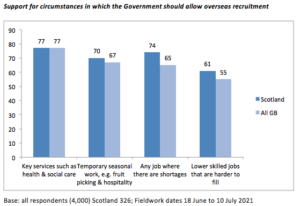 While similar to views across Britain, these findings show stronger Scottish support for immigration to fill shortages, including in lower skilled roles.

But where Scottish attitudes diverge more from other Brits is on asylum seekers and refugees. In Scotland there is majority support for an asylum system that prioritises fairness over deterring applicants, by 53% to 29% (+24), a wider margin than the 43% to 36% (+7) who agree across the UK. More than two-thirds of people in Scotland support asylum seekers having the right to work, considering it good for integration.

Scotland’s challenges
Responding to an increase in unfilled vacancies and falling unemployment, the Scottish government has asked the UK Government for flexibilities including visas for seasonal work and lower skilled roles. It can’t introduce its own flexibilities, with little scope for differentiation beyond the very limited Scotland Shortage Occupation List.

While Scotland’s hands are tied by the UK Government’s policy choices, it faces another perhaps bigger challenge – of how to attract and keep migrants to Scotland. The end of free movement closes a simple process and message. The new points-based system is complicated and costly.

The active engagement of employers, common during some of the years of highest net migration into Scotland in the mid to late 2000s, may need to be revisited. The Scottish government’s welcome programmes will also need to be continued, both to attract new migrants and to encourage the return of those with settled status who left during the pandemic.

Despite its restrictions, the new system offers opportunities for a Scottish migration strategy

Scotland has a shrinking population and sees migration as a means of ensuring future stability and growth. It can’t wait until it has control over immigration policy to replace the restrictive points-based system. But there are ways in which the current immigration system can be used to help ensure that Scotland can attract and retain the new citizens it needs. These could include:

While public support for immigration is quite strong in Scotland there could, however, be challenges from some quarters should unemployment rise. The Scottish government’s demographic case is not well understood by the public. Making a stronger demographic case for future migration, and communicating the stories and old and new Scots living and working together, would help to popularise and broaden support for Scotland’s role in welcoming migrants who can contribute to its future.

This piece is based on a chapter by Heather Rolfe and Sunder Katwala of British Future for Migration Policy’s Scotland’s launch report Scotland’s Migration Futures: Challenges, opportunities, options.