New research on public attitudes to issues of race, prejudice and inequality in Britain, among white and ethnic minority citizens, finds common ground on an agenda for change. So it is time to stop arguing about language and start implementing plans for action.

As the government prepares to publish its response to the report of the Race Commission, the need to talk about race in Britain is more pressing than ever. That conversation can sometimes be difficult and divisive, when people’s experiences of race and racism can be very different. Yet it is one that we will need to have all the same. New research from British Future, published today, suggests a way through.

Nearly a year on from the Black Lives Matter protests that brought fresh urgency to calls for change, there will be rightful expectations that talk must now lead to action to address the barriers that ethnic minority citizens still face, rather than just fuelling further angry culture clashes. The new report, Race and opportunity in Britain: finding common ground, was submitted as evidence to the Race Commission and provides new, detailed evidence of attitudes among white and ethnic minority citizens in the UK. Its findings illustrate why people can struggle to talk about race; but they also identify the common ground on which a positive agenda for change could be built.

The research reveals agreement on some of the challenges we face. While most feel that people from different ethnic backgrounds get on fine in their local community, they worry more about the national picture. Majorities agree that it is harder to get on in Britain if you are black (53%), Muslim (55%) or born outside the UK (52%), with 47% of the public agreeing that Asian citizens face similar barriers too. Yet the findings also highlight gaps in perceptions that can mean people talk past each other on race, particularly with regard to anti-black prejudice. Ethnic minority respondents were significantly more likely than white respondents to say that black people face a lot of prejudice (44% to 25%). White respondents were more likely to think that black Britons face similar levels of prejudice to Eastern Europeans or Asians. 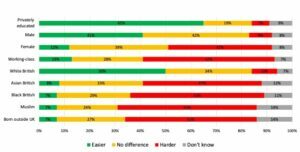 The research found shared foundations across ethnicities. Only a tiny minority, for example, reject the norm of equal citizenship, with just 7% of white and ethnic minority citizens disagreeing that ‘Black and Asian people born in Britain are just as British as white people born in Britain’. Around eight in ten Britons of all backgrounds agree that they are proud to be British (white 81%, ethnic minority 78%). 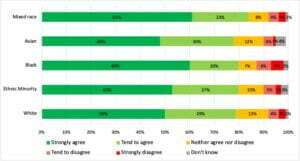 Yet perceptions of inequality varied significantly. Asked if they agreed or disagreed that ‘Britain is systematically racist’, white respondents disagreed by 40% to 28%. A plurality (43%) of ethnic minority respondents, however, agreed with the statement, including most Black British respondents (56%).

Attitudes varied significantly within different groups as well. Divides in opinion between generations can be wider than those by ethnic background. Younger people, in particular, were much more likely to report high levels of contact with people from different backgrounds and a keener awareness of the barriers they can face. Support for the Black Lives Matter protests among white 18-24-year olds (60%), for instance, was higher than that among ethnic minorities aged over 55 (though lower than the 80% support among young people from and ethnic minority background).

These different perspectives and experiences can make talking about race challenging, with many people worrying about saying the wrong thing. The research asked people about language on race, uncovering a pragmatic view that while ‘BAME’ is not rejected as a term by most ethnic minority citizens, it is not widely understood or liked by those it seeks to describe. A majority felt ‘Black, Asian and Minority Ethnic’, spelled out in words rather than as an acronym, was acceptable, yet more preferred ‘ethnic minority’. Few would describe their own identity with the four letters B-A-M-E. You can read our detailed findings on ‘BAME’ here.

A shared agenda for change

While people may struggle sometimes to talk about race, the new research finds greater scope for common ground on some of the elements of a pragmatic and shared agenda for change.

Perhaps surprisingly, given the polarised debate in media and politics around how Britain commemorates its imperial past, there is broad, inter-ethnic agreement that teaching young people about the history of Britain’s empire would be a positive step. Three-quarters of both white (73%) and ethnic minority Britons (75%) agree that “It is important that the history of race and Empire – including its controversies and complexity – are taught in British schools.” Only 6% disagree.

Other aspects of the commemoration of our history, however, remain divisive. Ethnic minority respondents were twice as likely as white respondents (30% to 15%) to agree that many statues put up in the past should be removed due to links to slavery; while white people are almost twice as likely to say no statues should be removed (43% to 23%). Only a quarter of both white and minority respondents chose a middle option, to consider removing a small number of statues with significant links to slavery.

Ask people what we should be commemorating, however, and there is more common ground. Eight out of ten people agree that doing more to recognise the Commonwealth contribution in the Second World War would be a positive way to promote understanding of the shared history of today’s multi-ethnic Britain, with similarly broad support among ethnic minority (76%) and white British (78%) respondents. Only 3% of people disagree with this proposal.

Schools are widely seen as key to promoting better race relations in Britain. Mixing between children from different backgrounds was seen by both minority and majority citizens as the greatest driver of positive change on race to date. So it is unsurprising that people would like to see more of it, with majorities of white (56%) and ethnic minority respondents (71%) agreeing that “Every school should ensure its pupils have significant contact across ethnic and social class lines.”

Ensuring that young people graduating from today’s multi-ethnic classrooms and universities get equal chances to succeed was also given priority across ethnic groups. A majority of white (57%) and ethnic minority respondents (68%) agreed that “Big companies should commit to monitoring applications to ensure candidates from different ethnic backgrounds have a fair chance of getting an interview.”

Action to address health disparities, highlighted by the Covid pandemic, was also prioritised across ethnic groups. Majorities of white (52%) and ethnic minority respondents (65%) would support the introduction of a new Health Disparities Unit to target at-risk and vulnerable communities.

“People worry about saying the wrong thing about race and can talk past each other when they come from different perspectives and experiences.

“We need to move on from arguments over language to a positive agenda to address the barriers to fair treatment that many of our citizens still face.  When it comes to some of the practical ways to tackle unfairness there is more common ground than we might think.

“Understanding our history, in all its complexity, is an important foundation in understanding why Britain looks as it does today and why we all have an equal stake in our society. Young people need to meet and mix more with others from different backgrounds at school. And when they grow up and seek work, their prospects should be determined by their ability, not their surname or background.

“We need to be able to talk about seemingly difficult topics, like race, inequality and empire. But we need action too.”