Attitudes towards Britain are more optimistic amongst immigrants than those born in Britain, according to our new report State of the Nation: Where is bittersweet Britain heading?. This might be because they may have fought hard and overcome adversity to make it to this country, argues Ian Birrell.

It is always hard to determine the precise state of any nation, since it is difficult to see currents flowing fast through a society, especially at times like these of great change. Yet one of the many striking features about Britain’s amazing year in 2012 was the way in which we took a look at ourselves and decided we rather liked what we saw. Amid the cheers and flag-waving was recognition that a rapid evolution had been handled rather well. 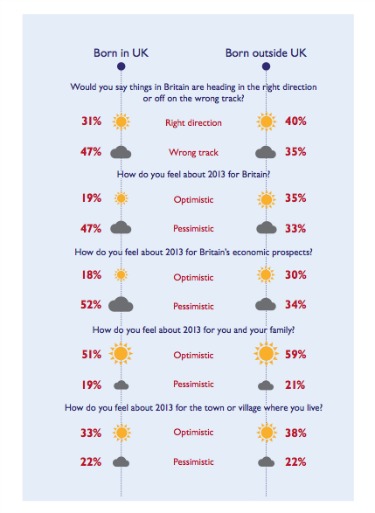 Nowhere was this quiet pride in a new-look nation more marked than among ethnic minorities. At the Olympics, it was not just expressed by medal-winning athletes but by the army of 70,000 volunteers, a high proportion of whom had immigrant backgrounds. “I felt it was my chance to give something back, to extend the welcome that I’d had to other people,” one Ugandan-born usher told The Observer.

This was vivid illustration of a little-noticed facet of immigration: how incomers can end up having greater affection for their new home than those whose families have lived here for centuries. Previous opinion polls have found, for instance, the most patriotic people on these islands are the Muslim communities from Pakistan and Bangladesh, which surprises many when you point it out.

Now we see this optimism expressed in British Future’s new poll. It finds significantly more confidence among immigrants gazing into crystal balls than among others more ground down by economic gloom. They are only slightly more positive about prospects for their own families and hometowns. The big difference comes when asked whether this country is on the right track or, most conclusively, how they feel about 2013 in Britain; those born outside the United Kingdom are an astonishing two and a half times more optimistic.

Why is this? It is hard to have a definitive answer. Perhaps our historic freedoms mean more when you have risked your life to come here from a birthplace ripped apart by war. Perhaps our economic woes are put in perspective when brought up in a land scarred by extreme poverty and you have bet your lifetime savings on a stake in Britain’s future prosperity. Or perhaps it is simply that sometimes it takes a newcomer to see most clearly our enduring strengths.

Yet integration is a two-way process. Amid the froth and fury of the immigration debate, it is important people understand this tide of patriotic fervour is waiting to be unleashed. We need to find as many ways possible to tap into it. Banish the hostile tone of so much discussion of immigration and integration; replace it with recognition that millions of people are desperate to play as big a part as possible in the nation’s economic, social and cultural growth.

Perhaps our historic freedoms mean more when you have risked your life to come here from a birthplace ripped apart by war. Perhaps our economic woes are put in perspective when bought up in a land scarred by extreme poverty.

Study after study has shown immigrants driven to amazing degrees of success. Britain is fortunate that its foreign-born population has a higher level of education than in almost any other leading nation. These newcomers are not only well-educated, but as this new State of the Nation poll exposes, profoundly patriotic and positive about our island land. We should share their optimism and welcome their participatory desire to build a better future.

Ian Birrell is a journalist and former speechwriter to the Prime Minister.