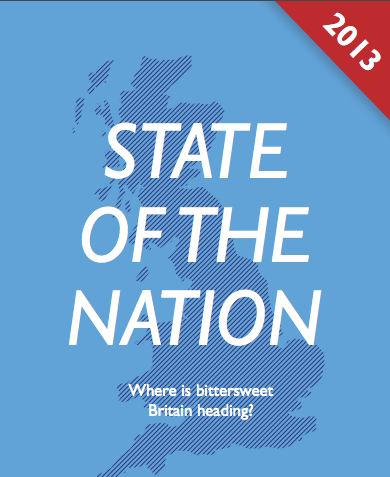 State of the nation: Where is bittersweet Britain heading? looks at where we are in Britain after 2012, and how we’ll fare our first teenage year in the 21st Century.

the report examines issues that could be set to divide Britain in 2013 – concern over immigration, Scottish independence and unequal opportunity across gender and class.

Featuring Ipsos MORI polling, State of the nation: Where is bittersweet Britain heading? looks at the topics that are going to be the defining issues for Britain in 2013. Sunder Katwala looks at what’s driving up immigration concern, Ian Birrell thinks about why newcomers are more positive than people born in Britian, and Alan maryon-Davis looks at what’s in store for the NHS on its 65th birthday.