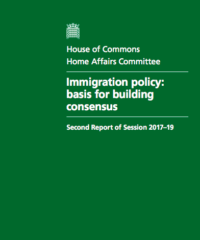 The publication this week of the Home Affairs Committee’s report, Immigration Policy: Basis for Building Consensus, is a timely intervention in the debate about how we reshape Britain’s immigration policy after Brexit.

It’s the first report of the Committee’s Inquiry into building consensus on immigration policy, one which has drawn extensively from our National Conversation on Immigration project with HOPE not Hate. Launching the Home Affairs Committee report, Chair Yvette Cooper said:

“The Government has a responsibility to build consensus and confidence on immigration rather than allowing this to be a divisive debate. But that requires a transformation in the way that immigration policy is made as too often the current approach has undermined trust in the system.

“We’ve deliberately done a different kind of inquiry, working with British Future, HOPE not hate and other organisations to hear from people in citizens’ panels and community meetings right across the country. What’s striking is that there is considerable common ground in contrast to the polarisation we too often hear in national debates.”

The report calls for greater public engagement in the debate about our immigration policy, finding that “there exists considerable public appetite for engagement on immigration and much common ground on which to build consensus but that the debate requires care, honesty and the opportunity for people to be involved. Achieving greater consensus on immigration will require a transformation in the way policy is made because in too many areas the current approach has served to undermine trust in the system.”

It recommends that public engagement should feed into an Annual Migration Report, presented and debated in parliament, echoing proposals from British Future’s 2017 Immigration Manifesto. The report also takes up British Future’s call for an immigration system that moves on from the ‘one size fits all’ approach of the net migration target and adopts different approaches and targets to different flows of migration, reflecting the nuance within public opinion – for example on high-skilled and student migration.

The National Conversation on Immigration continues to travel around the UK, engaging with people’s views on immigration and integration in their local area and nationwide.  In January it visits Knowsley, Penzance, Exeter, Sutton and Macclesfield; in February we’ll be in Preston, Uckfield, Lincoln and Grimsby before heading to Banbury, Aberystwyth, Wrexham, Yeovil, Berwick-on-Tweed and Edinburgh in March.  Later this year we will publish a final report and recommendations, which will include the results of national opinion polling and our open online survey. As Britain’s post-Brexit immigration system starts to take shape in 2018, we want to ensure that the public has a voice in the debate about what comes next.