Beyond a 90-minute nation: Creating an inclusive England outside the stadium


“I think the English need to be in the business of nation-building,” David Lammy MP told a lunchtime panel event on English identity.

“We have an opportunity to rebuild a national story – but there’s a danger that this is built on old myths,” said the Tottenham MP and shadow Justice Minister. “We need new stories, new myths, and we need to ground that in new institutions.”

“This has got to be a lot deeper than sport,” he added.

That echoed the message of report authors Sunder Katwala of British Future and John Denham of the Centre for English Identity and Politics.

The discussion, hosted by the Centre for English Identity and Politics and British Future, was convened to discuss new research published by the two organisations in the report ‘Beyond a 90-minute nation: Why it’s time for an inclusive England outside the stadium’. 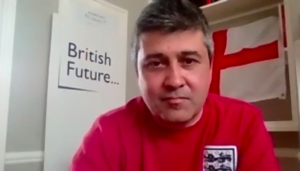 But Sunder – sporting his England 1966 football jersey – opened the discussion with a reminder of the important impact that sport, and football in particular, has had so far in building an inclusive England, from Viv Anderson in the 1970s to Marcus Rashford today. “Here is a symbol of England that we can all feel part of,” he said of England’s Three Lions, who kick off their bid for Euros glory on Sunday. “Football has given us a glimpse of the England we now are in 2021.”

That is borne out in the new research published today, showing that the multi-ethnic England football team is the symbol that unites people across England, regardless of race, age, place or politics. Other symbols ­ like the England flag or St George’s Day – don’t yet feel quite so open to people of all backgrounds.

But sport cannot do this alone, Sunder added. “Other institutions in England need to play their part too.”

Anne Coddington, a course leader at London College of Communications who has written at length about England football. She could easily claim the best football pedigree of the panel, having followed the England team home and away across many tournaments. That was a mixed experience at the time, she recalled, as a shared sense of belonging had to contend with a minority who were hostile to the presence of women among the England faithful.

Like Sunder, Anne recalled the sense of togetherness and shared identity that was manifest when football ‘came home’ at Wembley for Euro ’96, recounting the sense of connection she felt with complete strangers as they cheered England’s successes, then sat nervously through that penalty shoot-out. But she also wanted to look beyond football.

It will take more work, from more voices, she suggested, to engage a younger generation with Englishness. Speaking of her college students, she said: “We have lots of young people who are interested in their identity – their sexual or racial identity – but they don’t really talk about Englishness.”

England will need moments outside of major sporting tournaments if it wants to do this. St George’s Day falls on a Saturday next year, Anne highlighted, offering a bigger opportunity than usual to bring people together. “What are we going to do to celebrate that?” she asked.

James Kirkup, Director of the Social Market Foundation thinktank, felt that should also talk more about how we can combine our Engish identity with other identities we have as well – drawing on his own sense of identification with his Northumbrian roots as an example.

“We are all more than one thing,” said James. “We need to move away from a singular idea of Englishness.”

John Denham of the Centre for English Identity and Politics set out some practical ideas and lessons for taking English identity outside the stadium. His eight-point plan included using images of England and the English that fully represent all the people who live here, and avoiding the reinforcement of inaccurate or out-dated representations of English identity. He also echoed James’s point that we could do more to join-up local and national identities. But his final suggestion was a simple call for people, particularly the leaders of political parties and major institutions working in England, to step up. “Do not be afraid of English identity!” was his message to them.