English identity open to all, regardless of race, finds poll – and Three Lions is the symbol that unites us

The England football team, which kicks off its Euro '21 campaign on Sunday, has a shared appeal to people of all ethnic backgrounds in England, new British Future research finds. But building an inclusive English identity remains a work in progress and other symbols of England struggle to match its broad appeal.

The multi-ethnic England football team of Marcus Rashford and Gareth Southgate is the symbol of England that unites people of all ethnic backgrounds, in a way that other symbols like the England flag or a St George’s Day party still struggle to do, according to new research published today ahead of the Euro ’21 tournament. 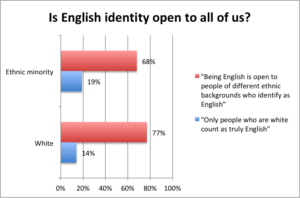 Yet building an inclusive English identity remains a work in progress. While the England football team, which kicks off its Euro campaign on Sunday, has a shared appeal to people of all ethnic backgrounds in England, other symbols of England still lack this broad appeal.

Two-thirds of white and ethnic minority citizens in England agree that the England football team is a symbol of England that ‘belongs to people of every race and ethnic background in England today’ (white 66%, ethnic minority 65%). Just one in thirteen disagree. The new findings, from Number Cruncher Politics, are published in the report Beyond a 90-minute nation: Why it’s time for an inclusive England outside the stadium, by British Future and the Centre for English Identity and Politics.

Only four in ten ethnic minority citizens in England (39%) currently agree that a St George’s Day party is a symbol of England that belongs to all of us, compared with over half (54%) the white respondents. 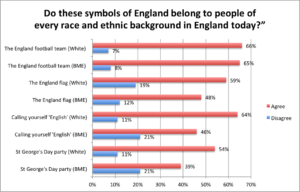 The new research also finds that sport helps people see the England flag more positively – but there is still work to be done for it to catch up with the Three Lions. During the Euros this summer, around six in ten white citizens (58%) and half (47%) of ethnic minority citizens would see an England flag outside a pub, or hanging from someone’s window, as a healthy expression of English pride. Divorced from sport, however, on a normal day of the year, only half of white citizens (49%) and 4 in 10 ethnic minorities (38%) see the flag in such a positive light.

A quarter of ethnic minorities (26%) and a fifth of white respondents (21%) would see the St George’s flag as a worrying expression of nationalism when it is not associated with sport.

That is even more the case for young people. A quarter of white 18-24s (27%) see the flag as a negative symbol of nationalism, even during a major sporting tournament. Only 38% see it as a healthy expression of national pride when associated with sport (36% without). A quarter of ethnic minority 18-24s also saw the flag as a negative symbol, regardless of sport (28% during a sporting event, 27% outside of sport). 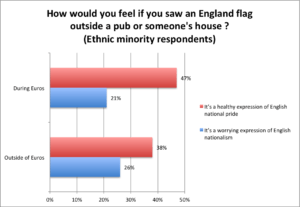 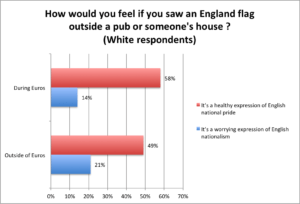 While sport has done much to advance an inclusive English identity – with cricketers such as Moeen Ali and England Rugby’s Maro Itoje playing their part too – it is time for other institutions to step up, say the authors of the report. Co-author John Denham of the Centre for English Identity and Politics said:

“As a national identity, rather than a community identity, Englishness must be open to everyone making their lives in England. There are real dangers if we make progress too slowly.

“If we are to build an inclusive English identity outside the stadium, institutions beyond sport will need to find their voice and speak for England too. Instead of staying silent on England – or worse, actively projecting outdated stereotypes of English identity – it’s time for English organisations outside of sport to make a positive contribution.”

An event at 12.30 today (10 June), hosted by the Centre for English Identity and Politics, will discuss the new research findings, with David Lammy MP, who recently faced a caller to his LBC show who said he could not be English due to his Caribbean background, among the speakers. British Future Director Sunder Katwala, Social Market Foundation Director James Kirkup, Anne Coddington of the London College of Communication and Professor John Denham, Director of the Centre for English Identity and Politics, will also speak at the event.