Show your support for #EnglandTogether

A new campaign for Euro 2020 is asking England football fans to show their support for the Three Lions and for an inclusive England that we can all feel part of, with the message: "Football's coming home – and it's a home we all share."

Today sees the launch of #EnglandTogether, a new initiative calling on England fans to show their support for the team and for an inclusive England that is shared by people of all backgrounds. 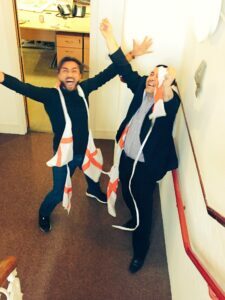 It matters that we have something to bring England together. In a democratic society, there are plenty of things we can disagree about with each other. Finding things we share matters too – this helps to foster a shared sense of identity and to bridge divides, pushing back against prejudices.

England today is proud to be inclusive – like the team that represents us. It is a team that fans of every background in England today can identify with and feel part of.

So we want to make sure that everyone who wants to be part of this occasion feels invited to join in. New supporters and lifelong football fans; new arrivals in England and those who can trace their family history back generations – this is an England in which we can all take pride.

Imam Qari Asim, Chair of the Mosques and Imams National Advisory Board, said:

“Our football team at Euro 2020, with its players from diverse backgrounds, has a power to connect with people across England.

“It will be very quiet at mosques for sunset prayers on Wednesday night – Young Muslims will all be glued to their TV screens, backing the national team.

“This Wednesday it won’t matter what colour your skin is, or what your faith or belief is, or which country your mum and dad came from. All that will matter is whether we can score more goals than Denmark.

“Football is coming home, and it is a home that we all share”.

“Come Wednesday evening, the whole of the country’s prayers will be with the England team, and we’re just a few goals away from making those 55 years of hurt finally disappear.

“This is also the perfect opportunity for us to reflect on how much we have grown as a nation since 1966. We can’t continue living in our past glories, no matter what we think those might be. We need to be proud of our Englishness and look to the future with hope and faith.

“So whether you’re wearing a turban, a kippah, a hijab or a baseball cap, it’s time for us to come together as one nation united by the Three Lions.”

Research from British Future finds that:

“Football is coming home – a home built on a long history of migration and contribution by people of all creeds and colours. From those who came on the Windrush having served in the Second World War, to the young men banging goals in for us this summer. Let’s hope Gareth Southgate’s team adds a new chapter to England’s history tonight.”

“Jewish people across the length and breadth of England are looking forward to celebrating a rare semi-final win for England in the Euros this week. After more than a year of missing so many of our communal celebrations, it is so wonderful that this group of players is bringing joy to so many people.

“Like the Anglo-Jewish community, this England team come from diverse backgrounds and heritages, and many of them have endured unfathomable racist abuse.

“After such a difficult year with so much isolation, this group of young men have brought people together across communities and divides. They are another reminder that we are better together than we are apart, and that if we all pull in the same direction, nothing is impossible.

“So let’s leave all differences aside, get behind the team and help ensure that Football comes home! COME ON ENGLAND!”

“It matters that we have something to bring England together. There are plenty of things we can disagree about in our society. So finding things we share is important: it helps to foster a shared sense of identity, helps to bridge divides and pushes back against prejudice.
“#EnglandTogether celebrates this great moment, which is shared by all of us in England today. Whether you’re a lifelong football fan or just enjoying the occasion; and whether your family stretches back generations or is new to these shores.

“If Gareth Southgate’s team makes it to the final on Sunday it will be England’s biggest party in 55 years – and we want everyone to feel invited.”

“I am so looking forward to Wednesday. Fingers crossed we can make it to the final after so many years of hurt.

“Growing up as an England fan it was confusing at times, seeing our Black players being booed in the early 1980’s. Now the country is behind the team.  When England do well, the whole country comes together and it is so positive to see.

“I watched the Ukraine game in the pub and when England scored everyone was up celebrating, regardless of background or faith.  Football can bring people together like no other sport in England. Come on England!”

“This England team is proudly working class, multi-ethnic and multi-faith. Lots of the players are the children and grandchildren of immigrants. And the team is a true reflection of the wonderful diversity of working people in towns and cities up and down the country.

“No matter your race or background, everyone can feel a part of this team. So on Wednesday, let’s all come together as a nation to cheer England on – and finally bring football home!”

“Many of us will be cheering on our England team not only for the remarkable success they have achieved for our country, but also because of their principled stance against racism. The talented team and their forthright manager have shown leadership both on and off the pitch.

“In our England team we see in ourselves the best of our society. A reflection of our diverse communities and a model for unity. We all owe the England football team some gratitude for bringing the country together during difficult times. We pray the chorus comes true: football’s coming home.”

“There’s no doubt that football helps us feel English today. When we asked people what’s most important in order to be considered English today, they listed speaking English, believing in democracy, being born in the country and supporting our national teams as the top four characteristics. Supporting England at Wembley this week goes to the core of who we are.”

“Our football team represents the inclusive country that we are proud of. This week we are hugely grateful to Gareth Southgate and his team for bringing the country together and look forward to them bringing football home.”

“Football brings England together – inspiring a sense of the Englishness, open to all, that we can build off the field too.”

Hayley Bennett, Spirit of 2012 trustee and founder of Nutmegs, said:

“Support for the England football team spans people from many backgrounds. It has brought together people of every race and religion across the country.”

But we need to make sure that England’s and the UK’s sporting successes create a legacy, in the form of deeper conversations about national identity – including Englishness – as a truly inclusive identity outside the football or sports stadium. That is why we are supporting the #EnglandTogether campaign.”

“Major tournaments are important national moments which bring England together, but too often when the sporting passion dies down so too does the conversation about English identity. Beyond the Euros England must continue to come together to champion the civic, inclusive Englishness that is emerging – Southgate’s England if you will – one that takes pride in what we can achieve together, and of which all who live here can feel a part.”

“A strong civic nationalism can be very positive and uniting – strengthening social relations and thus improving opportunities for all individuals, regardless of their background. Such positive patriotism ought to be welcomed across the political and philosophical spectrum, and can often be best fostered and expressed through supporting our national sporting heroes.”

“Belong – The Cohesion and Integration Network is pleased to be supporting the #EnglandTogether campaign. Belong members across the country know the value of sport for building bridges across differences in local areas and bringing different communities together. The England team are excellent role models for us all, demonstrating that it is possible to achieve great things when we build relationships of mutual respect, understanding between people from diverse backgrounds. On Wednesday night we can all come together to cheer the England team on, to celebrate our diversity as a country, and show our togetherness and pride in this fantastic team.”

"Whether you're wearing a turban, a kippah, a hijab or a baseball cap, it's time for us to come together as one nation united by the Three Lions."