Nearly two thirds (60%) of 16 to 24 year olds can’t name the year that WWI ended, and just ahead of the centenary 54% of the same age group can’t name the date of the start of the war, according to new research from British Future.

But it is not just young people who aren’t fully engaged with the history of WWI, when asked by pollsters YouGov on behalf of British Future, members of the public of all ages hazarded guesses as wildly out as 1800 and 1950 for the start of the Great War, and 1910 and 1960 for the end date.

Sunder Katwala, director of British Future, said: “The centenary is a great opportunity for museums and schools to trace back our nation’s history using tales of our great grandfathers or other relatives. Learning about what our nation was like in those years helps us understand more about how Britain has evolved into the nation is it today. What’s the point of having a shared history, if we don’t know about it?”

Kings College London academic Shiraz Maher has written an article for British Future on why it is important to increase awareness of Commonwealth troops in WWI, published today.

British Future found that a third (34%) of the public couldn’t name the year that WWI started, but that rose to 54% of 16-24 year olds. The best informed age group were the over 60s. 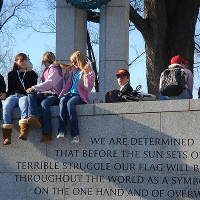 While 44% of the public were able to place Passchendaele as a WWI battle, only 25% of 16 to 24 year olds knew of it.  The Scots (50%) were more likely to know Passcendaele was a WWI battle than any other part of the country. And 18% of 16 and 17 year olds thought the battle between the Duke of Wellington and Napoleon at Waterloo took place during WWI, compared to 2% of the 60 plus age group. Around 16% of the public mistakenly thought the WWII offensive the Battle of the Bulge was in the Great War, while 1% of Scots thought that Robert the Bruce victory at Bannockburn was in World War One.

The polling for British Future also found a massive 85% of the public supported the statement that British schoolchildren do not know enough about British history, the centenary of the start of WWI is a good moment to encourage them to learn more, with 74% of 18-24 year olds supporting the statement, and 92% of the over 60s.

Katwala said: “People’s knowledge of even the basic facts about WWI is very shaky, but the good thing is they are keen to find out more.

Katwala added: “The centenary is a huge opportunity for schools and museums to do more to help our kids and all ages learn more about our nation’s history. That’s why British Future and the Citizenship Foundation hopes to work with schools on how to use 2014 to make history matter. Who and what the country is today is informed by Britain’s past. Remembrance helps us to learn about our shared history and that includes people across faith and ethnic backgrounds. As well as the British soldiers, there were thousands of Kenyan and Indian troops fighting for Britain, and it is important we remember them too.”

The younger generation were more likely to know that significant numbers of Canadian, Indian and Kenyan troops formed part of the British military force, than the over 60s.

Andy Thornton, chief executive of the Citizenship Foundation, said: “Most families in the nation will be able to trace their ancestors’ part in that, no matter where in the world they lived during that era.  We plan to bring this to life in the school setting in a learning programme that uncovers each young person’s relationship to that history. It will show how this era led to many revolutions in our shared life, including  an unprecedented time of peace and prosperity.”

View the results of the British Future polling, and the figures on public knowledge of WWI history.