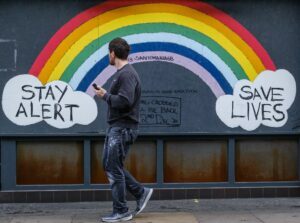 2020 was an extraordinary year that few of us had anticipated. Here are some of the ways in which British Future responded to the events of the year of the Covid pandemic – and how it reshaped the public conversations about social connection, race, immigration and identity.

The first day of a new decade saw a wide coalition of civic voices commit to work together to make the 2020s a Decade of Reconnection.

Our publication The Reset Moment with King’s College London looked at the prospects for immigration policy in this parliament, reporting on attitudes to immigration after the general election. Could Boris Johnson maintain the balance and could Labour build a bridge to across different views of immigration, asked Sunder Katwala for ConservativeHome and LabourList. Wendy Williams’ review on the lessons of the Windrush scandal was published. Jill Rutter looked at the challenges for Home Office reform.

As the Covid lockdown began, Sunder Katwala reflected on how Clap for Carers showed our need for social connection at a time of social distancing, proposing the NHS birthday become a moment of national thanksgiving.

As evidence emerged of ethnic disparities of life and death in the Covid pandemic, Sunder Katwala contributed to the ‘Our Other National Debt’ collection on the lessons of the pandemic for race equality.

The APPG on Social Integration released the interim report of its Covid inquiry, Social Connection in the Covid-19 Crisis, on the challenges of reaching vulnerable groups, tackling online exclusion and building a legacy from the volunteering surge.

As protestors in Bristol brought down a statue of the slaver Edward Colston, Sunder set out key principles for finding common ground on contested history.

British Future and Kings College reported on whether the Covid pandemic had shifted immigration attitudes, with new research and a webinar.

The birthday of the NHS on July 5th saw millions of people take part in Thank You Together, the first public activity of the Together coalition, capturing the importance of the NHS as a symbol of social connection in our society.

The report Remembering the Kindness of Strangers examined how the pandemic had shifted – as we embarked on Talk/together, the biggest ever public engagement exercise to talk about what unites and what divides us, and what we want to do about it together. Over 100,000 people have taken part in the online survey to share their views.

Sunder Katwala set out what we learnt about immigration during Boris Johnson’s first year as Prime Minister.

Sunder was sceptical about a silly season culture war over the Proms.

Our ‘Divided Society’ webinar saw Elizabeth Carnelly, Iain Dale, Kezia Dugdale and Kwame Kweh-Armeh talk about the challenges of social connection being addressed by Talk/together, while the BBC’s Liz Green hosted a Yorkshire launch of the project.

British Future was part of an alliance of eleven anti-prejudice charities engaged in a Stand Up to Hate campaign to mark hate crime awareness week, by letting people know how they could contribute to promoting decent social norms online. A fringe meeting with Conservatives against Racism for Equality talked about the centre-right response to the new politics of race.

We launched a new Remember Together campaign with the Royal British Legion, to better recognise the contribution of black and Asian soldiers in the second world war. It was backed by 50 prominent public voices, including the Prime Minister and Leader of the Opposition.

The independent inquiry into Citizenship policy, chaired by Alberto Costa MP, published its final report, seeking to lower the Barriers to Britishness.