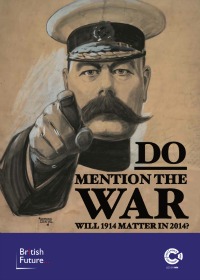 Will 1914 matter in 2014? Nobody who experienced the war is still alive. Most of us struggle to recall more than the most basic facts about what happened and why. Yet, the first great global conflict remains a pivotal cultural reference point for understanding the last century and how it shaped the country we have become today.

In our report, Do mention the war, we highlight these points and more. Do mention the war draws on original research into what the public know and don’t know about the first world war, why they think next year’s centenary will matter and what they want it to be about.

The report features polling carried out for British Future by YouGov, which found that Britons struggle to tell the first world war and the second world war apart. For example, more people think Britain declared war in August 1914 because Germany invaded Poland (as was the case in 1939) than Belgium: only 13% knew the right answer.

Drawing on public workshops in England, Scotland and Wales, alongside the new national polling, the report also reveals why most people think we should seize this chance to learn, and explores which meanings of the centenary people agree on and which ones don’t.

Other highlights of Do mention the war include: