Will Scotland decide the future of the UK again?

The General Election in Scotland this year is probably the least predictable the nation has ever seen – and the contest in the 59 Scottish constituencies could play a significant role in deciding who governs Britain.

ICM polling for British Future highlights the extraordinary achievement of the SNP in capitalising politically on a referendum defeat in which Scottish independence was rejected. Its opponents in Scotland – particularly the Labour party, which was in the process of selecting a leader when the poll was conducted – will hope to improve on their poor showing in this survey by the time the votes are cast in May. 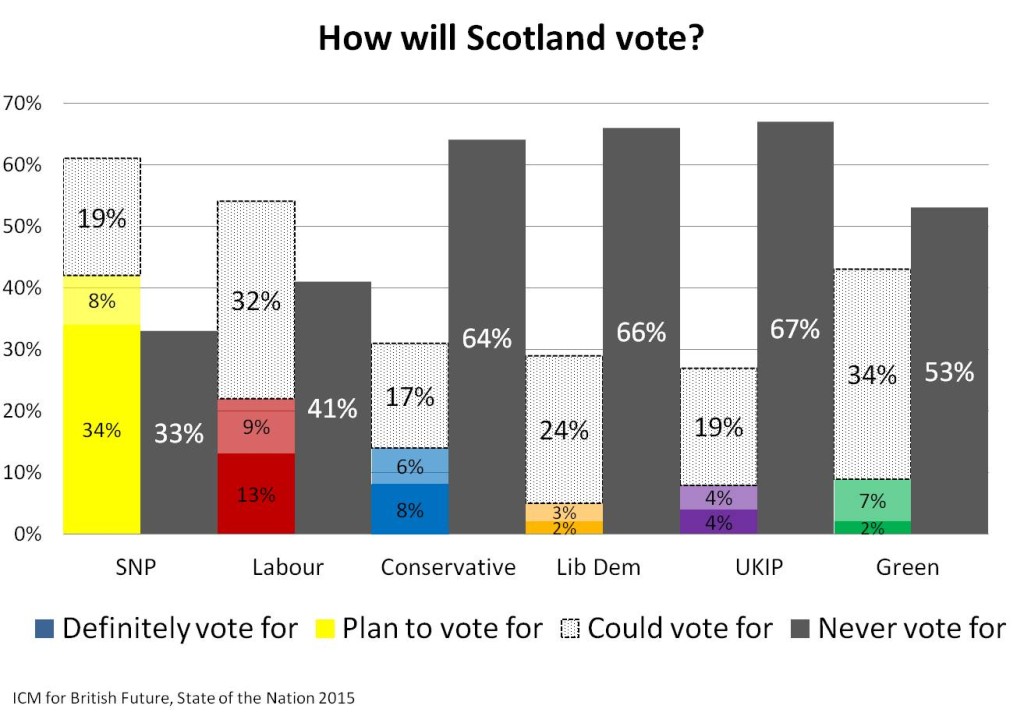 Scots are pretty agnostic about the idea of a Labour-led government in Westminster, yet have strong opinions when it comes to seeing both the Conservatives and Liberal Democrats leave power.

29% of respondents in Scotland said that they would like Labour to govern, while 37% would prefer they didn’t, and 23% don’t mind.

But most Scots are clear that they want both the Conservatives (57%) and Liberal Democrats (54%) to leave office.

Crucially, only one in three Scots say that they would never vote SNP. That is a lower score, among Scots, than the proportion who say that of the Conservatives or Labour across Britain – a remarkable achievement for a party that recently sought to dissolve the United Kingdom.

This suggests that the SNP’s current Scottish political ascendancy is not simply about having a strong appeal for those who want independence. Despite 55% of people rejecting independence, the party can also seek to appeal for the votes of a significant tranche of those who disagreed with it in the September 2014 referendum. 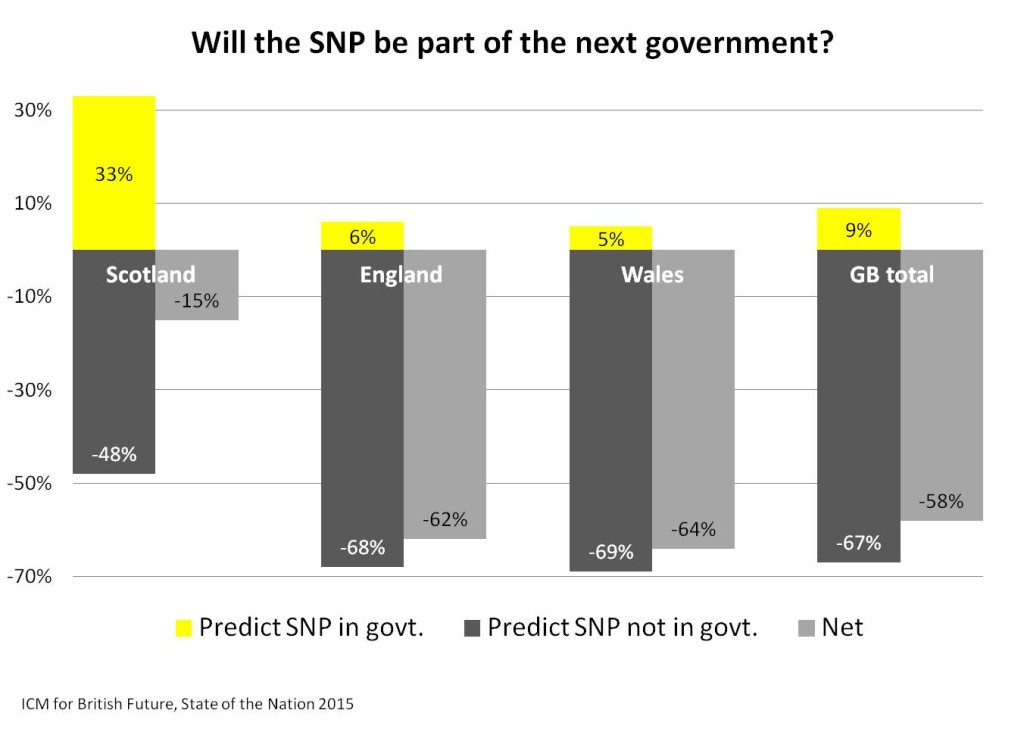 The SNP has a strong chance of increasing the six seats that it holds.

One third of Scots predict the party will participate in the next government, with 49% predicting a Labour-led government and 51% predicting that the Conservatives will remain in power. Their own votes may decide whether that happens.

Voters in England and Wales are much less likely to agree. That is probably an accurate prediction: if the SNP did hold the balance of power, it would be much more likely to use its parliamentary power on an issue-by-issue basis than to take ministerial office in Westminster. The finding, however, may reflect how little the post-independence SNP surge is known outside Scotland, except to those who follow politics most closely.

Will the SNP be part of the next government?

While the Scots may well be happy if the SNP were to take up a place in government after the election in May, there is a stark difference in views outside Scotland. This presents an interesting dilemma – or perhaps choice – for the SNP in the event that it does have a significant presence in a hung parliament.

On the one hand, if its negotiating demands are seen as legitimate by many Scots, but viewed with much more suspicion, and less legitimacy, in England and Wales, then this could well, over time, prove corrosive of the legitimacy and purpose of the United Kingdom, and so help to boost the SNP’s core mission of Scottish independence.

If, however, the SNP does want to show positive results from its strategy of “standing up for Scotland” then it could have a clear interest in shifting perceptions beyond Scotland too. Other parties could well be more constrained, politically, by what deals they can make if SNP demands are perceived to lack legitimacy with voters outside Scotland.

One feature of attitudes towards devolution, which is often overlooked, is that voters across Britain are often in favour of stronger devolution for their own nation in the UK, and are usually then in favour of reciprocal arrangements for the other UK nations too. The SNP’s political support for a stronger English and Welsh voice in the Union would probably come as a surprise to most English voters in particular, but by a margin of more than two to one people believe that a stronger recognition of England would help the UK work as a multi-national state, a view shared by 28% of Scottish and 32% of Welsh respondents. This may help to shift sceptical perceptions of the nationalist party’s agenda at Westminster.

Yet it remains to be seen whether those attitudes would affect how the SNP would use any extra power and influence in Parliament after the General Election.

The outcome in the Scottish election in 2015 will depend on whether the SNP can maintain its claim that strengthening the party’s presence in Westminster will do most to stand up for Scottish interests, against Labour’s argument that it is the only party capable of changing the government in London.

The outcome of that argument could do much to determine how the kaleidoscope of Scottish domestic politics shifts and settles after the historic 2014 referendum vote.

For more on Scotland, see the State of the Nation 2015 report.