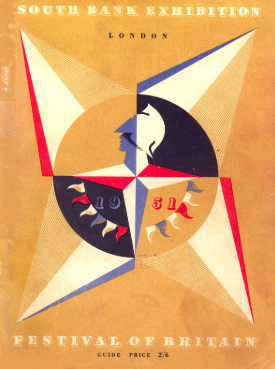 Picture the situation, writes Steve Ballinger. You’ve moved into a new house, one you’ve had your eye on for a while. But the previous occupant had sent out invitations to a massive party at what is now your place – and they’ve cleared off, leaving you holding the Twiglets.

Oh yes, and they’ve invited everyone in Great Britain and Northern Ireland.

That will be the situation for Britain’s next Prime Minister, whoever that may be. Theresa May announced the Festival of Great Britain and Northern Ireland ahead of Conservative Party conference last year, and asked us all to save the date – sometime in 2022 – in our diaries. But Ladbrokes will currently give you odds of 16/1 against her still being Prime Minister by then. So it will be up to the new PM to rescue this Festival, or to let down the guests.

Despite widespread social media mockery of the proposal, dubbed ‘The Festival of Brexit’ in the press, research by ICM for British Future found that most of the public think it could actually be a good idea. Six in ten people (62%) approve, with only a party-pooping 10% opposed. But 2022 could actually be the worst-possible year to hold such a festival. Rather than cancel or plough ahead, the next PM should postpone, and do it properly.

Unlike so many political decisions at the moment, the reason isn’t only because of Brexit – though our research did find that framing the Festival around Britain’s departure from the EU would be divisive and unpopular in some places. As one member of our Sunderland focus group put it:

“The Brexit After Party” – is that what you’ll call it? Close down Nissan and have a party!… It would be dangerous… there will be street fights.”

But more pointedly, holding a Festival of Great Britain and Northern Ireland in 2022, on the centenary of Ireland’s partition and civil war, would be the worst possible timing – particularly given the additional focus placed on the border by Brexit. Stakeholders that we consulted in Northern Ireland felt very strongly that this timing could be deeply difficult. A festival that should be about bringing people together could instead drive them further apart.

So the new PM should postpone the Festival of Great Britain, at least until 2025. And he or she should take a good look at what has worked well, and what has not.

The Millennium Dome was a public and artistic failure. But we, in the UK, were never really the audience: it was a conscious act of ‘rebranding’, to tell a story about Britain to the world, without a conversation at home about what might be in it. Initial descriptions of the aims of the Festival of Great Britain and Northern Ireland suggest a similar tension: is the audience at home or abroad, or can it be both? A marketing message for the world about the UK as a place for trade and investment would be better delivered by an advertising agency.

Instead, our new leader should look at a more recent success. British Future’s research found the centenary of the First World War, and the five-year artistic programme that accompanied it, had remarkable reach and resonance across different sections of society, crossing divides by politics, geography, age, ethnicity and class.

There was not one secret ingredient. But many events were free and in public space, breaking down barriers to participation. The programme used volunteers, with 2,000 taking part in Jeremy Deller’s We’re here because we’re here, and many more events were participative, encouraging people to talk to others they didn’t know. Organisers also spent time building links with local communities. And crucially, it got out of London: more than 80% of the programme took place outside the capital, with events in the UK’s small towns as well as its biggest cities. A Festival of Great Britain and Northern Ireland must not feel, to all those outside the capital, like a Festival of London. As one Northern Ireland stakeholder told us:

“It [the festival] could easily become an English story, a London story and an establishment story of London establishment artists… I am not sure about this Festival. You can’t just fly in Tracey Emin and expect people to engage.”

The good news is that the Festival of Great Britain and Northern Ireland remains a largely blank piece of paper. Set the date back and there is still time to get it right.

The festival will need broad ownership across the nations and regions of the UK and across political tribes. An idea first announced in the Sunday newspapers to open a Conservative Party conference will have to work much harder to command that consensus. There are practical challenges too. If a government consumed by Brexit does not put the wheels in motion in good time, this festival could risk becoming a neglected, even orphaned child, associated with a Prime Minister no longer be in office.

But artists and organisations were pragmatic about the festival and wanted to make a success of the cultural programme, welcoming additional funding for arts organisations if it was made available to run events across the breadth of the UK. And few of the public had actually heard of the Festival at all – suggesting that a change of date would hardly cause a scandal. It’s clear that the new PM will have a lot on. When people heard about the idea, however, most people liked it.

The most striking finding of our research – published in the report Crossing Divides: How arts and heritage can bring us together – was the very broad consensus across society that we are far more divided than any of us would like. Moments that have the potential to bring people together are few and far between – so it is important to get them right. Perhaps the next moment that truly unites the country, when that sad day comes, will be the death of the Queen, Britain’s longest-reigning monarch. At that time we will be united not in celebration but in mourning. But at some point afterwards will come a Coronation – which might in fact make a rather fitting year for a Festival of Great Britain and Northern Ireland.