Why we need to talk about race

The issue of race has never been more salient, but for many people it can feel like a difficult topic to discuss, especially if that conversation turns into a shouting-match. We will need to build more confidence in how we talk about race if we are to find common ground on how to address unfairness and inequality. New research findings for British Future, submitted to the Race Commission and to be published in full later this month, suggest why conversations about race can feel difficult - but also how we can find common ground.

Reactions this week to Harry and Meghan’s televised interview have illustrated the capacity for the issues of race and racism to divide opinion. Yet they also highlight the need to talk about race, if we want a society that is fair to all citizens. That can be harder because we each bring to that conversation our different experiences of living in this increasingly diverse society – making it harder to talk about race in ways that find common ground, and which can promote positive change.

British Future has been having these conversations with members of the public, in (online) discussion groups across the country and nationally representative research – with boosted samples of 1,000 and 2,000 ethnic minority Britons in two waves of polling conducted by Number Cruncher Politics. The findings, published in full later this month, have been submitted to the Race Commission, whose own recommendations are currently with the Prime Minister. Some of them are previewed in today’s Observer newspaper, alongside a commentary from British Future Director Sunder Katwala. 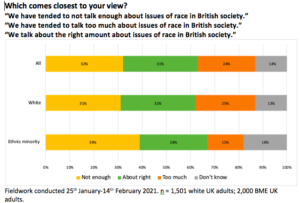 “Because we’ve never really had these conversations about race and inequality, last year’s Black Lives Matter protests really stood out and, especially with young people, they were desperate for it to create change. We’re really tired of this discrimination. So, I’m happy that we did have these conversations.”

“I think the last six to nine months, since Covid and George Floyd in America, its brought race to people’s minds. And before that it wasn’t really spoken about – it’s only after recent events that we’ve spoken about black people and our health, or how we interact with the police.”

With people coming from such different starting points, it is perhaps unsurprising that discussions about race can struggle to find common ground, particularly when they so often become centred on a binary question of ‘is the UK racist or not?’ Britain has made progress on race – but a self-congratulatory message, about being better than the past, will only cause frustration if it crowds-out those who feel we still have much more to do if we are to achieve race equality.

Our research did find much common ground between citizens of different ethnic backgrounds, particularly on the practical policies that could form an agenda for change. There is a shared desire, for instance, for stronger action on hate crime, including on social media; for greater efforts to tackle bias in recruitment for jobs; and an expectation to see Britain’s growing ethnic diversity better represented at the top of our major institutions.

The issue of race has never been more salient, but for many people it can feel like a difficult topic to discuss, especially if that conversation turns into a shouting-match. So we will need to build more confidence in how we talk about race if we are to build common ground on how to address unfairness and inequality.