Why do both sides look like they’re losing the EU debate in Britain?

Whether there will be a referendum on Britain’s EU membership, and when it might take place, could be the biggest decision made later this year once the next government is formed. But the crucial in/out decision itself, our poll finds, will largely be decided by people who are yet to make their minds up on Europe; and an ability to address their concerns about immigration will be crucial to those who want to influence that decision. 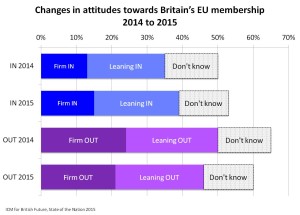 In a dramatic year for the politics of Britain’s EU debate several significant developments saw Europe often on the front pages: the opening up of free movement to Romania and Bulgaria; UKIP topping the poll in the European Elections; a falling out between the British government and its EU partners over the appointment of Jean Claude-Juncker and then the EU budget; and David Cameron setting out his proposals to reform EU free movement.

The overall effect of these events on views about Britain’s place in the European Union appears to have been rather minimal. The State of the Nation poll finds that views about whether Britain should be in or out of the EU are similar to those in a 2013 ICM poll for British Future, exactly one year earlier. The public is leaning more ‘out’ than ‘in’, but with a slight narrowing of the gap between the two polls, from 13 points to 7 points.

Most people are a long way from making up their minds. Only just over a third of the electorate are sure about how they would vote on a referendum. There are committed minorities on both sides of the debate – but most people have not given the issue much thought yet.

What is clear is that any future referendum on the EU will be decided by those for whom the EU is not an especially big issue, and who aren’t sure which side has the stronger case.

The most interesting phenomenon of the current EU debate is perhaps the fact that both sides appear to damage their own cause more than their political opponents do.

While the rise of UKIP has enthused and mobilised staunchly anti-EU opinion, it appears to have done little or nothing to expand support for leaving the EU, and instead risks putting a ceiling upon it. With only 50% of people believing that UKIP is either mainstream – but with more to do on extreme candidates – or already an important new voice in British politics, any ‘out’ campaign would need to tackle the possible toxification of the eurosceptic cause by it’s most public champion.

The ‘out’ side faces significant challenges in persuading younger, more affluent and more metropolitan voters – both that it has a proper, real-world plan for exit, and that it is confident and at home in modern Britain, rather than seeking to turn the clocks back to a bygone era.

On the other hand, the ‘in’ side struggles to understand culture and identity, and in particular struggles on immigration. Yet attitudes towards immigration are a very strong predictor of people’s views on EU membership. Pro-migration liberals are firmly pro-EU, while the quarter of Britons who are strongly opposed to immigration are staunchly anti-EU.

The majority of the population, however, are far less polarised when it comes to the immigration debate: they are the ‘anxious middle’, concerned about the impacts of immigration on jobs, housing and public services, but also aware of the economic benefits it brings. 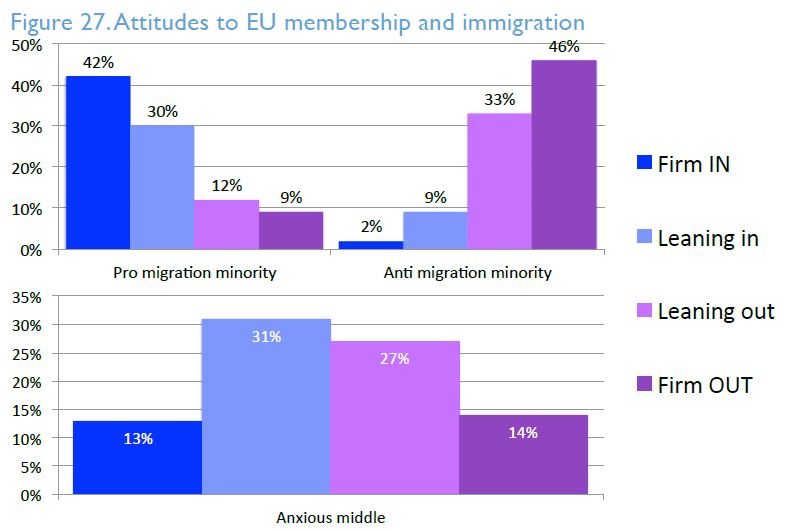 This larger group are much less sure about where they stand on Europe – and it is they who will decide the outcome of a referendum.

The State of the Nation poll casts some important light on this disconnect. It finds that most people who are firmly pro-EU are discomfited by debates about immigration and would like politicians to talk less about it. It is an instinct that leaves pro-EU voices struggling to understand or engage the crucial ‘leaning out’ group. It helps explain why pro-EU voices struggle to engage with the concerns of the undecided – and why, if the EU referendum is lost by those who want to stay in, it will almost certainly be because of immigration.