What should Labour say about immigration? 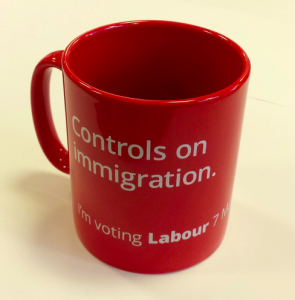 As it gathers in Brighton, writes Matthew Rhodes, the Labour Party is still coming to terms with the magnitude of the two earthquakes it has recently experienced. In the turbulence of the last few weeks it’s easy to forget the scale of electoral defeat the party suffered in May. But the election of Jeremy Corbyn as its 21st leader is the kind of political event that can disorientate parties, even whole political systems, for quite a while. At some point, however, attention will inevitably turn to addressing the issues the public are concerned about – the economy, jobs, housing, the NHS, public services, education – and, of course, immigration.

This last issue continues to be the biggest area of concern for much of the public. of Over 50% of them recently said it was the issue that pre-occupied them most, with the economy lagging behind in 2nd place on 27%. While the other top-order political issues will be addressed by Corbyn eloquently and confidently, it is questionable whether a Corbyn-led Labour party will expend much energy addressing public concerns over immigration.

In May the Tories didn’t win because of their immigration policy. Trust in the Conservatives to manage immigration had in fact collapsed, with the party falling behind Labour, as well as UKIP, as the best party on the issue, having led Labour by 38% at the same time point in 2010. So Labour didn’t lose the election on immigration: it’s clear that voters’ rejection of the Labour offer had more to do with their views on the party’s Primeministerial candidate and its economic credibility.

Both major parties tried, as much as possible, to avoid talking about immigration during the campaign. Ed Miliband made a couple of speeches and the party even emblazoned its message “controls on immigration” on a mug, which started an internal party debate on whether or not different members of the Shadow Cabinet would be seen drinking from it.

The party could have said more. Our polling found that only 10% of the public thought that Labour talked too much about immigration during the campaign, while 44% would like to have heard more. 46% thought it got the balance about right,.

On the doorsteps things were tricky for candidates. In target seats up and down the country Labour PPCs reported that immigration was time and again the issue on which they were getting beaten up. Many felt ill-prepared for this and that the “controls on immigration” message didn’t work, partly because the candidates themselves weren’t comfortable with it and also because the public simply didn’t buy it. When voters raised the issue of Eastern European migration, Labour candidates had nothing to say when asked why the party was against trusting the people and offering an EU referendum. One candidate summed it up this way – “our immigration policy didn’t work for anybody; it offended liberals and it left those feeling anxious even more anxious.”

But what happens now? Jeremy Corbyn is undoubtedly the most pro-immigration leader elected by a major party since another certain former leader of the Labour Party… Tony Blair. And therein lies a conundrum. Disagreeing on virtually every other subject, Blairities and Corbynistas agree over immigration, albeit with different motives – for the right it’s about being open to the world and pro-globalisation, for the left it’s an expression of an internationalism grounded in socially liberal and culturally cosmopolitan values.

For both groups there is a “no compromise with the electorate” approach. Blairites have responded to public anxieties about immigration by bombarding people with facts about its positive impact on GDP, and “myth busting” arguments about the pressures it can bring. However it is clear that these arguments seldom win people over who don’t already agree. In fact they can make people feel more anxious and mistrustful.

For the Labour Left, their focus on values can manifest itself in the dismissal of voters who disagree as being motivated by xenophobia. The linked argument that concern with immigration peaks at a times of economic insecurity, when people look for a scapegoat, runs counter to research into public attitudes: anxiety is higher now, for example, when the economy is doing relatively well, than it was in the depths of the economic downturn.

But the problem for both is that the majority of the electorate simply don’t agree with either of them.

In the context of the current refugee crisis, and the Government’s continuing commitment to a net migration target it simply can’t hit without severely damaging the economy, Labour’s voice on immigration will be important. In 2015 Labour’s message was very much focused on the exploitation of migrants in the workplace and the consequences for all workers as a result. It talked about properly enforcing the minimum wage and preventing undercutting of wages. But the party and its candidates were, and still are, much less confident when trying to address the more important drivers of public concern, such as cultural questions of identity and integration.

With Corbyn’s appointment of Andy Burnham as Shadow Home Secretary there will immediately be the potential for some friction over this issue. During the leadership campaign, Burnham made it clear that Corbyn’s view of the world was “very North London” and that voters across whole swathes of the country did have legitimate anxieties about the scale and pace of change brought by historically high levels of migration. It is clear that Labour needs more to say to engage with the voters it lost to the Conservatives and UKIP in May but also to those who are still with the party but are hanging on by a thread.

The problem with the “Controls on Immigration” message – and the accompanying mug – was that it just didn’t sound Labour. “Controlling Immigration Fairly” would have been a more authentic message for the party. Labour will need to find language that reflects its values but which also acknowledges people’s worries about the impacts of immigration on their local areas and the need to address them. It needs to find a confident and authentic voice. So while it is likely to continue with the “fairness in the workplace” response, it also needs to stop running away from the issues of cultural identity and change. Too often Labour voices sound as if they hope to change the subject, back to jobs or housing, whenever issues of immigration, identity or Europe come up.

Essentially Labour needs to be clear that in engaging the “anxious middle” – the 50% of the electorate who are neither ‘pro’ nor ‘anti’ immigration but a bit of both – they are not compromising any of their core principles. Instead they are simply taking people’s concerns seriously and not dismissing them.
It needs to acknowledge that while immigration brings benefits to Britain it also creates pressures on public services, and translate this into something more than a technocratic answer about, for example, local school places (important though that is). Public anxiety is equally rooted in softer questions of culture, identity and belonging – so Labour needs to understand that the answer isn’t always another hard policy proposal.

Labour also needs to learn from the current Government’s immigration troubles. It will find it hard to convince people that it can bring the numbers down drastically. So it shouldn’t repeat the error of making unrealistic promises that can’t be kept. It should, however, work hard on finding ways to manage immigration pressures fairly.

The party should also have a lot more to say on the vitally important topic of integration. Ensuring and encouraging people who do come here to become “one of us” – learning English, becoming part of the community, working hard and paying taxes – could form part of a positive vision for modern Britain that is rooted in Labour values: a Britishness based on fairness, hard work, support for the NHS and on the equality of opportunity that  comes with access to English language learning.

We will see how Labour begins to tackle this challenge at conference this week and in the months and years ahead. As much as Mr Corbyn may like to think that this is an issue he can just ignore – because his economic, housing and welfare policies will solve the immigration “problem” – it is clear that this is not going away.

If he does engage with the issue it will be fascinating to see what he says and does. But if he fails to, at some point the voters may remind him that immigration is an area of public policy that they think and worry about – and that they wonder why the Labour Party has nothing to say about it.

Matthew Rhodes is speaking at What should Labour say about immigration? on Tuesday 29 September 6.30pm – 8.00pm at St Paul’s Church, West St, Brighton, together with Lord Maurice Glasman, Dawn Butler MP and Kirsty McNeill of Save the Children.