Welcoming spirit must deliver ‘Homes for Afghans’ too

A new 'Homes for Afghans Action Plan' urges Michael Gove to set up a taskforce to extend the Homes for Ukraine scheme and allow the generosity of the British public to help the thousands of Afghans who escaped Kabul and are still in hotel accommodation seven months later. 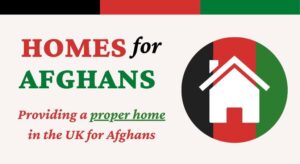 A coalition of civic society voices, led by British Future and More in Common, have published a Homes for Afghans Action Plan and joint open letter to Michael Gove MP, Secretary of State for Levelling Up, Housing and Communities, urging him to set up a taskforce to extend the Homes for Ukraine scheme and allow the generosity of the British public to help the thousands of Afghans who escaped Kabul and are still in hotel accommodation seven months later.

While the most immediate priority is to match British hosts with Ukrainians – and many of those who have offered their home will find a match – it is likely that ultimately the level of popular support in the UK will surpass the number of Ukrainians who can, or who want to seek refuge in the UK. Already well over a hundred thousand families have stepped forward to share their homes and offer sanctuary to those fleeing Ukraine.

The organisations are calling for the government to urgently commit to make faster progress on resettling properly the Afghans evacuated last summer from Kabul, to whom Britain owes a debt of honour. The letter and Homes for Afghans plan, which have broad political support and are backed by a wide range of organisations working with refugees, propose a Phase Two of the Homes for Ukraine scheme which will allow businesses, civic and faith groups, military charities and others to support both Ukrainian and Afghan refugees, further mobilising the public desire to offer community support.

“The surge of public empathy for Ukraine is not limited to one group of refugees. We owe a debt of honour to the Afghans evacuated from Kabul last summer too.

While there are some different challenges in finding homes for these two groups, we today set out practical plans for how Michael Gove and his department can link up these schemes to harness support from business, civic society and local government to speed up homes for Afghans too. That is how they can get on with rebuilding their lives by being welcomed into communities around the country.“

“The fact that the people from every corner of our country have stepped forward to offer support to Ukrainians fleeing Putin’s invasion is a testament to the public’s deep commitment to supporting those who need our sanctuary.

That’s why, alongside the immediate priority of matching Ukrainian to offers of housing, volunteers should also be given the opportunity to help support the Afghan families, who seven months after being forced to flee Kabul, are still stuck living in hotel rooms, at a cost to the taxpayer of £1.2 million a day.”

“This is the time to use the generosity of spirit being shown by so many people to Ukrainian refugees to set up a long-term scheme to allow for planned resettlement of refugees. This will be more humane, more efficient and cheaper for the taxpayer in the long run.”

The letter to Michael Gove reads as follows:

It has been fantastic to see the tremendous outpouring of public support for the Homes for Ukraine scheme. We believe that this public desire to play a part in welcoming refugees is not restricted to Ukrainians alone but will often extend to others in need of sanctuary in Britain.

We would like the government to urgently commit to making faster progress on resettling properly the Afghans evacuated last summer from Kabul, to whom Britain owes a debt of honour.  It is impossible for people to rebuild their lives while still in temporary hotel accommodation. We propose that you should lead a new cross-governmental Taskforce to find the right solutions for these families. This should aim to complete its work in 100 days, redirecting the large amounts of public money being spent on hotel accommodation to rehouse people appropriately.

Different solutions will clearly be needed for Afghan families – for whom rooms in people’s homes will rarely be an appropriate solution. But many of those who signed up to help Ukrainians, especially if they don’t ultimately match with a family fleeing the invasion,  will be keen to help in other ways to help refugees start a new life in Britain. We believe they should be given more opportunities, training and support to do so.  Alongside that, organisational offers of sponsorship that will be invited in ‘phase two’ of the Homes for Ukraine scheme, should incorporate a Homes for Afghans strand from the outset, so that businesses, civic and faith groups, military charities and others are invited to increase the supply of homes  for both of these groups with urgent needs. Engaging with local councils to relocate groups of Afghan families together, and mobilising the public desire to offer further community support, could especially help to address anxieties about potential isolation when moving to unfamiliar places.

While such bespoke schemes have been used to respond to immediate crises, we believe there is an important opportunity to knit these together into a long-term UK commitment to resettlement. We look forward to the government acting on its pledge for a consolidated UK Resettlement Scheme (UKRS), which we believe should, as advocated by the Red Cross and politicians of all parties, welcome at least 10,000 people a year, alongside an expanded community sponsorship programme. This would enable better planning nationally and locally of how to make welcoming work for those who come to Britain and the communities they join, as part of a sustained new era of welcoming in Britain.

Dr Julian Huppert, former MP for Cambridge and former Chair of the All-Party Group on Refugees

Will Somerville, University of Sheffield

Zehra Zaidi, Action for Afghanistan and We Too Built Britain

Gwen Hines, Save the Children

Julie Siddiqi MBE, Together We Thrive

Akeela Ahmed MBE, She Speaks We Hear and the Anti-Muslim Hatred Working Group