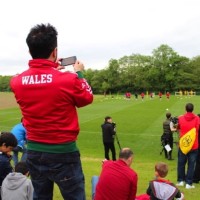 Television history was made in Wales last Friday night, a football match became the most-watched sporting event ever on Welsh screens writes Ashok Ahir. Yes, football, not rugby, which historically delivers huge audiences for BBC Wales but football – and what a match it was.

1.27 million people (more than 40 percent of the Welsh population) were watching when Wales came back from 0-1 down against Belgium to win 3-1 in a memorable night at Stade Pierre Mauroy in Lille, in what was the biggest game in Welsh footballing history.

It seems, every game played at Euro 2016 has become the most important game in the country’s history. But then this is a team that is making history.
Wales is the first debut team at the European Championships to make it through to the semi-finals since Sweden in 1992 and with a population of just three million, it’s the smallest nation to get this far in the competition’s history.

Along the way they’ve seen off the Great Bears of Russia and the Red Devils of Belgium – footballing and global giants floored by dragons who’ve been growing in might and stature each new day they spend in France.

This week one of the world’s leading sports dailies L’Equipe published its list of the tournament’s best eleven players of the quarter-finals – four of them are from Wales.  Gareth Bale and Aaron Ramsey of course, but also captain Ashley Williams and Chris Gunter who plays his club football at Reading FC in the Championship.

Truth be told there could have been a few other Welshman on that list including Joe Allen and James Chester, proving to the rest of the world, what everyone in Wales already knew, we are not a ‘one man team’.

Another in contention is Hal Robson-Kanu, a player who’s currently a free agent but who epitomises the spirit of this group of players and the support team around then. A fans’ favourite for some time, he even has his own chant that bounces along to Salt-n-Pepa’s “Push It”, Robson-Kanu came into the tournament with a lot to prove. After being at Reading for twelve years he’s opted to see out his contract and put himself on-show at the Euros.

Coming into the tournament, Robson-Kanu had scored just two international goals, the last against Cyprus in qualifying. In France he’s doubled that record and the goals have been both crucial and special.

The first was the winner against Slovakia in the 2-1 victory in Bordeaux and the second was the goal that put Wales ahead in Lille. A goal that summed up the team slogan #TogetherStronger perfectly.

A wonderful long pass from Bale found Ramsey on the outside of the box. He slipped the ball to Robson-Kanu in the penalty area to see him perform what used to be known as a ‘Cruyff turn’ but will soon enter Welsh folklore as the ‘Kanu roll’. Leaving three Belgian in bewilderment he slotted home calmly past one of the best keepers in the world. A goal that rightfully has been voted the best of the quarter-finals.

Born In England – Made in Wales

All three of Wales’ goal-scorers in that famous win over Belgium in Lille were born in England, and despite the best attempts of some of the English press to try to claim them, all three of them are an inherent part of the Wales team and proud of it.

Ashley Williams was born in Wolverhampton, Hal Robson-Kanu in Acton and Sam Vokes in Southampton. All of them qualified for Wales through a grandparent, but their footballing skills, have been shaped in the Wales development squads.

As part of the Wales set-up they have undergone a programme that has helped them understand the importance of the ‘dragon on their shirt’ and the message that goes with it.

‘Gorau Chwarae Cyd Chwarae’ was initially put on the Wales badge as part of a rebrand in 1951 – seven years before the last most-famous Welsh team played in the 1958 World Cup in Sweden. But it has never felt as important as it does today, roughly translating at ‘Best Play is Team Play’ it sets the tone for the national team.

The Team Is The Star

Journalists and pundits who’ve been flocking to the Wales headquarters in Dinard in Britanny ever since they qualified for the knockout stages have been amazed at the openness and approachability of the players, management and staff.

No other Galactico at Euro 2016 has been as available as Gareth Bale, in all he’s fronted six press conferences during the tournament, the latest of which this week was full to the rafters.

The press pack who’d been following the England team in Chantilly finally made it across to the Breton seaside en masse and they and their pan-European counterparts tried their best at finding new lines to pursue with the Real Madrid star. He batted off all of the expected questions about going head-to-head with Christiano Ronaldo, focusing instead on the squad as a whole:

“The team is the star. We don’t worry about the opposition.”

Maybe the national press will make some different deployment decisions in future competitions, that would be one positive outcome of Wales’ success.

The Band of Brothers

It seems apt that a team stationed in northern France should now be making major breakthroughs wherever they asked across a land of contrast, from Bordeaux to Paris, Toulouse to Lille and now onto Lyon.

The players continually refer to each other as a ‘band of brothers’ and it is their fraternal spirit that has come through in their off-duty moments in Dinard.

The Wales players, staff and fans are having the times of their lives in France and back home their endeavours have gripped a nation. As Manager Chris Coleman said at the end of the game against Belgium

“Dream. Don’t be afraid to have dreams”

We’re all dreaming, please don’t wake us up.