Voice of a Generation: The final three

The hunt for the Daily Mirror’s Voice of a Generation is drawing to a close. Nine aspiring young journalists made their pitches to young voters in the pages of a national newspaper. Now meet the three impressive finalists who joined British Future in the Daily Mirror offices to meet the editor and make their last pitch for the job. 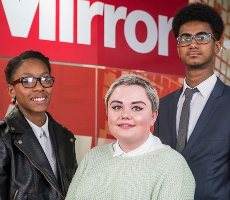 The three candidates, Helen Whitehouse, Chante Joseph and Kieran Etoria-King, were given a tour of the Mirror’s offices in Canary Wharf when they arrived for the final day of selection. As well as face-to-face interviews with the senior Mirror team, they were set a series of tasks to test their journalistic skills, including writing a profile of newly-appointed Secretary of State for Culture Sajid Javid.

Each candidate also faced a panel of senior Mirror staff led by Lloyd Embley, editor-in-chief of both the Daily and Sunday Mirror. He was joined by weekend editor Alison Phillips and executive features editor Shiraz Lalani. Steve Ballinger, British Future’s communications director, finished off the panel.

To round off the day, each finalist gave a short interview telling readers a little more about their background, interests and aspirations, which have been published in today’s Daily Mirror.

We’re looking forward to the launch in May of the Voice of a Generation project, a year ahead of the 2015 general election. With so many people in public life keen to speak about or on behalf of young people, it’s important for them to have a platform to speak for themselves.