The Voice of a Generation tour – what do Britain’s first-time voters really think?

Today marks the launch of the Voice of a Generation tour, a joint project between British Future and the Daily Mirror. Nineteen-year-old Helen Whitehouse – a young journalist and first-time voter herself – will travel to some of the most closely-fought constituencies across the country to uncover stories from young people eligible to vote for the first time in May’s General Election.

From Plymouth to Glasgow Helen will be getting to grips with the issues that matter to young voters, and to the many young people who aren’t sure if they’ll cast a ballot on 7 May. She’ll report what she finds, and platform the voices of young voters themselves, on this site and at www.mirror.co.uk/voice. You can follow her tweets at @VoiceOfGen1

The Voice of a Generation project aims to build up a picture of what matters most to the youngest members of the electorate, and help them get their voices heard by politicians. In many of the constituencies she visits, Helen will be introducing young would-be voters to the candidates seeking their votes this May, so that they can put their concerns to them directly. 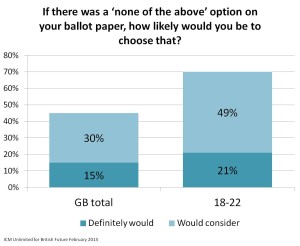 New ICM polling released today by British Future finds that rather than being apathetic and unengaged, young voters are turned off by the party politics on offer to them. Seventy per cent of potential first-time voters say they would consider putting their cross by ‘None of the above’ if the option was on the ballot paper.

It’s well-known that young people are less likely to vote than their elders. More young people have voted on a reality TV show (34%) than are sure to vote in the general election, our poll finds, with only 23% of potential first-time voters saying they are certain to cast their vote in May.

But this disengagement is far from the whole story. Nearly three quarters (72%) of potential first-time voters say they would be more likely to vote if they felt politicians listened to their concerns, or if they felt it would make a difference to their lives (73%).

Over half of the 18-22-year-olds polled (52%) had signed a petition about something they care about, more than the GB average across all ages.  And more than 1 in 10 young people have participated in a march or demonstration. As Helen says: “It’s wrong to say that young people don’t care about politics – but it often feels like politics doesn’t care about us.” 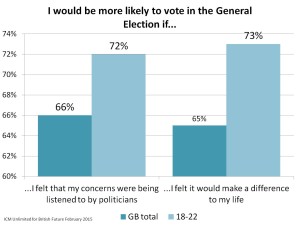 The Voice of a Generation tour hopes to explore the extent of this disconnect between politics and the lived experience of many
young people in Britain.“For thousands of potential new voters,” says Helen, “The main parties all sound pretty much the same.” Of those young people uncertain to vote, one in five say it’s because “I don’t feel I have enough understanding of the differences between the political parties.” A further 16% say “political parties are all the same”.

It culminates at an event in Parliament on 24th March where young people that Helen has met during the tour will meet representatives of the main political parties and voice their concerns directly to them.

The Voice of a Generation tour, funded by the Paul Hamlyn Foundation, seeks to look beyond the well-worn fact that few young people will vote in this year’s general election and find out what they really think about politics and politicians, about the issues that affect them and what might make them engage with electoral politics. With hundreds of thousands of first-time votes still up for grabs, it’s not too late for politicians to take heed of what they say.