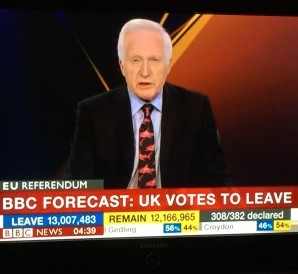 Most people in Britain went to bed as normal last night, writes Sunder Katwala, while the campaigners and politicians stayed up for a night of nail-biting political drama. The country now awakes to a political earthquake. The vote to leave the EU does not just reverse the referendum result of 1975; it could see 2016 join 1945, 1956 and 1979, even 1707  and 1534 as years when history turned.

The Leave vote is a very personal vote of no confidence in the Prime Minister. After such a shock event, David Cameron may take some time to cosier his position – perhaps the weekend, perhaps just breakfast – but it is hard to see him waiting long before he tells the country when he plans to relinquish his office.

It is also a vote of no confidence in the European Union as an effective way to pursue our interests and values. In this, the voters took a cue from the defeated Remain campaign, which found little confidence in the product it was selling, hoping to win mainly by establishing that leaving the EU involves big uncertainties and risks, while finding much less to stay about any positive benefits of staying in.

The British have never been starry-eyed about Europe. We entered late and remained semi-detached, uncomfortable members of a political club we joined for primarily economic reasons. Yet we were  ‘stay in sceptics’ for more than forty years because, on balance, all of the frustrations of a multinational bureaucracy were seen as a price worth paying for the gains. In this age of the faltering Eurozone, that pragmatic case for the EU was much weaker.

The Leave vote also represents a public vote of no confidence in political and economic elites. Voters heard the advice of the International Monetary Fund, the Bank of England, the Treasury and the City about the economics of Brexit. Hearing pro-Remain views expressed from the commanding heights of the FTSE100 was received by many people as showing why those who are doing best in this economy wouldn’t want much to change. But those warnings did not feel, to those who are struggling economically and have little sense that they have much to lose, like a compelling reason to cast their own vote for ‘Remain’ if voting for the status quo would mean more of the same.

So the issues of cost – whether Britain gets enough out for what we pay in – and control, especially of immigration, trumped the economic warnings.

Immigration played a crucial role in the Leave victory. The Leave majority is a public vote of no confidence in how governments have handled immigration over the last decade. Most people feel that the scale and pace of immigration has been too high; that governments neither predicted nor prepared for the local impacts; and that they made and broke promises they could not keep.

For most people, the failure lies with politics, not with migrants themselves. While there is a toxic and prejudiced minority in Britain, what the majority want is immigration managed properly, not to slam the borders shut or to stir up prejudice against those who are part of our society. Migrants from Spain or Italy or Poland who come to Britain to work hard and contribute to our society are valued and welcomed. People do, however, want their government to have a much better plan to manage immigration more fairly for everyone.

The 3 million European migrants who live in Britain are undoubtedly now anxious about what the Leave vote means for them. It is important that they hear quickly and unequivocally from our Government that this is their home and that they continue to be welcome here. There is a broad consensus that this is the only humane, practicable or legally defensible choice – but it is important that it is said loudly and clearly that those on the winning side of the referendum and their opponents agree that this is simply the right thing to do.

Please sign our Change.org petition, ‘Tell EU migrants in UK – this is your home, you are welcome here‘

There will be more debate about immigration and what changes to immigration and free movement we now choose for the future. The public need to be more closely engaged in the choices. Everybody shares a responsibility to get the tone right – to engage anxieties properly, while rejecting efforts to stir up prejudice.
As well as the future of 3 million people who live and work alongside and among us, it is important that we understand what else was not on the ballot paper, as well as what was – especially after the campaign was interrupted by tragedy, with the murder of a dedicated public servant.

This was a democratic referendum, allowing citizens to decide whether the European Union remains an effective vehicle for our interests and values – or whether we can better pursue them from the outside. It was a debate about how these island nations best engage in the world – both within Europe and beyond it. It is unlikely to be a vote to cut ourselves off from Europe or the world, as we continue to cooperate with our NATO allies.

It was not a vote about whether we want to live in 2016 or to bring back the pre-EEC Britain – of pounds, shillings and pence before the currency was decimalised. It was not a vote which can or should reverse the enormous social changes we have seen to the position of women, to black and Asian Britons, or to gay people in British society.

It is dangerous to confuse a democratic referendum with a culture war in British society.

There will be detailed analysis of who voted which way. We should remember when we talk about how age, class and geography influenced the vote that not everyone conformed to type. So there were also young voters for Brexit and pensioners who wanted to keep faith with the European Union. There were plenty of votes to Leave in leaning-in London, Scotland and the university towns where Remain had a majority, just as many people in ex-coalfield constituencies and coastal towns carried by Leave did think that Remain was the safer choice.

We may have voted for different choices yesterday but we wake today as neighbours, workmates and friends once again. As the late Jo Cox MP said, we have far more in common than that which divides us.

There were important differences in worldview between the Remain and Leave arguments, and within those two rival campaigns too. Both sides had their optimists and their pessimists: those with an internationalist or global perspective and those more concerned with the brass tacks of the local impacts. But most voters on both sides were grappling with similar issues: what is the best choice for our economy, for our society, for the prospects of the next generation. It was never the case that patriotism or concern for what was best for them, their families and their country belonged to one side of this referendum.

It will matter, especially, how the winners of the referendum talk about the choice that we have made – but also how the disappointed losing side responds and engages with the challenges and opportunities that we will all now face together.

This referendum was a big moment for British democracy. The decision we have made, to leave the European Union, must now be respected. From some there will be elements of  panic, whether in the financial markets or for what this means for our society. It is a step into the relative unknown, but one that a majority of Britons were willing to take, so a calm and constructive response is needed. There were many different visions of what Leave would mean and no agreed plan. Much debate will follow over exactly where it takes us and what Britain looks like outside of the EU. We will all now need to be part of that debate about our future.