Has UK rolled out red carpet for foreign entrepreneurs?

Britain’s economic success and social mix has been built through the efforts, creativity and talent of migrant entrepreneurs, and migrant investors have increased the flow of wealth to the UK. Given their ability to create wealth and jobs, David Cameron promised back in 2010 to reform the immigration rules to allow more foreign entrepreneurs to set up new businesses in the UK. The prime minister pledged to “put out the red carpet” for those with good business acumen. The Tier 1 route (specifically for highly skilled) is designed to attract such individuals and to meet this policy objective of attracting the ‘brightest and best’. But how well is it working? What motivates those who apply for it and what are their experiences? asks Heather Rolfe. 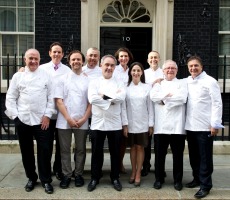 Raymond Blanc from France (right) among key figures from the British restaurant and food industry who gathered at Downing Street in 2012 to celebrate British culinary talent. Photo: Crown CopyrightNew research, which includes case study evidence from 46 Tier 1 applicants, finds that the route is attracting high net worth individuals and people with a strong track record in business overseas. They are undoubtedly an asset to the UK: entrepreneurs taking part in the research had set up businesses across diverse sectors from spas to mechanical engineering, from software design to breweries. Although many had been in the UK for little more than a year, they had launched products and services, hired staff and contracted with other businesses. Many had hired professional staff in areas such as IT and marketing and less skilled people from their local area.For example, a web-based business first established in New Zealand had grown rapidly in the UK and was developing spin-off products, including games and toys.

But, for many entrepreneurs, setting up in the UK was far from child’s play. Business plans had been challenged by recession and bureaucracy. Banks presented a big barrier to many new businesses, with respondents saying they were made to feel more like ‘suspects’ than customers and having to wade through red tape, rather than tread the red carpet promised by Prime Minister David Cameron to migrants “whose hard work and investment will create new British jobs.”

Despite these setbacks, they were convinced that Britain is not only a good place to do business, but also a good place to live and raise families. Although many were living in London, others had settled outside the capital, including in south-west England and in Scotland. They were attracted by our location within European markets and to other key business and trading centres, language, time zone, ease of set up, technological infrastructure and supply of skills. Other factors, which attracted investors in particular, include good schools, culture and lifestyle, the people, diversity and cosmopolitanism, the arts, rule of law and, perhaps surprisingly, the weather. Many were keen to integrate, for example by becoming involved in their local communities and their children’s schools.

Although the Tier 1 route brings clear benefits to the UK, we may be failing to attract some of the brightest entrepreneurial stars. The reason for this is that the UK Border Agency makes decisions about entry through Tier 1 without any assessment of business potential, and based almost entirely on financial resources, with a required investment of £200,000 (a lower investment is possible, but involves securing UK investment in advance).

We suggest including an assessment of business plans and viability within the application process, perhaps through involvement of the Department for Business Innovation and Skills’ UK Trade and Investment (UKTI) arm. The report’s other recommendations include on-going business support to give migrant businesses the best start and more flexibility in the renewal process, rather than decision-making by fixed criteria and milestones.

So, it seems the Tier 1 route, while not a red carpet for migrants, is of value to the UK, attracting talented individuals and entrepreneurs with a strong track record. With some adjustments, it could be even more effective in attracting the brightest and best.

Heather Rolfe is principal research fellow at the National Institute of Economic and Social Research (NIESR).