Romney’s strategy could have won 1988 election

The Republicans used to routinely win Presidential elections. Now the party will have to have a fundamental rethink if it is to win again. The central key to Republican dominance a generation ago was race and demography. The same factors are now the key barrier to the party winning again, argues Sunder Katwala.

The race for the White House in 2012 offers a striking example of a major western election in which a party has destroyed its own prospects of power by going too tough on immigration, by being perceived to adopt so hard a tone on the issue that it has toxified the party brand, particularly with Hispanic voters, who are the fastest-growing section of the electorate, but also with voters under 35 more generally, particularly graduates.

White voters remain by far the largest group of voters, but they are falling, election on election, as a proportion of the overall electorate.
Mitt Romney did more than enough last night to win the 1988 or 1992 Presidential elections – by taking 6 out of 10 white voters last night
In 1992, 6 out of 10 white voters would have given the Republican candidate a majority of all Americans: because 87 per cent of the electorate in 1992 was white, six out of ten white voters would have made up 52.2 per cent of all of those who voted.

If you could only take Romney back two decades and he had enough white voters to win the election, without the need to win a single non-white, Hispanic or black voter at all. But fast forward a quarter of a century, and the Republicans are still campaigning like it is 1988, in an America that looks and so votes rather differently. 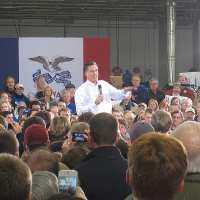 So the Democrats ought to worry that Barack Obama’s share of the white vote fell from 44 per cent in 2008 to 39 per cent according to exit polls this time. But the reason as few as four out of ten white votes were enough for the Democrats is that the Republicans are so bunkered in with non-white voters. As the Hispanic share of the electorate rose again from nine per cent to 10 per cent, the Republican share fell to 29 per cent from the peak of 40 per cent won by George W Bush in 2004, and a worse performance again than the 31 per cent of John McCain in 1988. That cost them Colorado, Nevada and Virginia last night – and kept Florida on a knife-edge again – helping to close off any viable route to the White House through the electoral college. As authoritative analysis of the Latino vote from America’s Voice shows, it is hard to see any future Republican majority without addressing this issue head-on. Yet this is just the latest twist in how the ability to appeal to shifting demographic coalitions has reshaped the American political contest and the fortunes of the major political parties.

This 2012 defeat means that the Republicans have now lost the popular vote in five of the last six elections since the end of the Cold War, excepting George W Bush’s re-election as a war President in 2004, though they also took the White House by splitting both the electoral college and the Supreme Court down the middle in 2000. The popular vote tallies show again that this has been a closely contested electoral era – a story of the 50:50 nation, split down the middle between red and blue states, so that all eyes so often turn every four years to Ohio and Florida – and yet the fundamentals underpinning that contest have been gradually shifting against the Republicans, unable to unseat a President with economic and jobs data which, historically, has signaled defeat rather than victory.

Yet the Republicans had won five out of the six Presidential elections before that, only losing one of the contests from 1968 to 1988 (and fairly narrowly) in the wake of Nixon’s disgrace over Watergate. From 1968, the Republicans benefitted from a kaleidoscope shift in electoral politics because of race and civil rights. They may have been the party of Abraham Lincoln, but it was Democrat LBJ who signed the civil rights act in 1964. It was the greatest single peacetime political achievement in recent US democratic history, and the President’s party paid a high price for it.

“There goes the south for a generation”, LBJ said as he signed the Civil Rights Bill into law. And he was right. 1964 was the last year that any Democratic Presidential candidate won a majority of white voters, because the opportunity to appeal to the southern Democratic base was skillfully exploited by Richard Nixon, with an appeal to the “silent majority” and a “piano strategy” of appealing to the grievances of white southerners to build a new dominant Presidential coalition.

Many of the same themes were still at play, and effective, during the brutal electoral mugging of Michael Dukakis in 1988. The Democrats’ large lead at the time of the conventions eviscerated by Lee Atwater’s campaign which successfully portrayed him as weak, soft on crime and too liberal on welfare and tax, with some emotionally resonant appeals to fear, in the infamous Willie Horton advertisement, and grievances, over affirmative action, politics to make the point resonate. Sixty nine per cent of the Hispanic vote for Michael Dukakis couldn’t save him from defeat.

But there is nothing inevitable about the Republican party suffering from these demographic shifts. “Demographics is destiny” does not make any sense in politics.  What matters is what choices the parties make to respond – just as they have to an expanded franchise, shifting levels of education, and the changing social role of women in the past.

Republican strategists of the Reagan era talked about the question of whether Hispanic voters become like Italian-Americans – so that voting patterns converge on those of the broader electorate, perhaps with conservative social values or pro-business instincts coming to the fore – or like Afro-Caribbeans, where there remains a strong sense of group identity and very distinctive (pro-Democrat) voting behavior.

George W Bush, with a message of “compassionate conservatism” and supporting bipartisan immigration reform including regularization of the undocumented, followed the Reagan strategy – and won 40 per cent too of Hispanic votes in 2004. Everything that that the Republicans have said and done about immigration since 2008 has created more cohesive, and anti-Republican, voting patterns – making the Hispanic vote look less Italian, and more similar to black voting.

British Conservatives face a similar, if less intense, problem than the Republicans – winning just 16 per cent of non-white voters, compared to 37 per cent of white voters, in the 2010 election – and so should now understand the Republican failure with Hispanic voters as an object lesson in what not to do. The US experience strengthens the warnings from influential thinkers such as Paul Goodman, co-editor of ConservativeHome, that “On present voting trends, the party is facing demographic marginalization”, based on the evidence on British attitudes among  non-white voters compiled by Michael Ashcroft. Britain has changed since the last Tory majority victory in 1992, and the failure to win a majority in 2010 was partly a failure to adapt the right’s strategy sufficiently to keep pace with it.

Tory strategists are aware of the need to avoid the same pitfalls as the US right, and are studying how the Canadian Conservatives have also made enormous inroads into traditionally Liberal minority communities, and won a majority as a result. Yet there are bound to be pressures from the growth of UKIP in the run-up to 2014 which could lead them into the same trap as the US right, as long as the need to deal with potential defectors from the anxious right flank is not balanced in the party’s internal discussions by the need to reach out to those who were not persuaded in 2010.

In the States, the next generation of Republicans, especially Marco Rubio and Jeb Bush, may need to have quite an argument with the party base over how to take the Republicans out of the bunker of demographic decline. Immigration reform and the “Dreamer generation” of those who were born and bred in America is likely to become a symbolic touchstone. It could split the US right for a generation. Their best argument will be to use the examples of Reagan and Bush to persuade the party that it could retain its values – and compete to get elected in the United States of America of this century as well.

This article was first published by the New Statesman.