The accidental meeting of the net migration target

Having ditched the net migration that dogged his predecessors for a decade, there is a certain irony in Boris Johnson looking likely to have met it by accident, writes Sunder Katwala. With the numbers game called off, the politics of migration may look rather different in the future.

Publication of the quarterly migration statistics used to be a big media moment, with an immigration minister dragged over the coals every three months on the Today Programme over failures to meet the net migration target. Yet today’s publication, by the Office of National Statistics, passed almost without mention.

That’s partly because there’s a much bigger story in town, of course. The Covid pandemic has also produced the most dramatic changes in immigration for a generation – but it may be some time before the longer-term impacts become clear.

The ONS has the difficult job of communicating what is and is not known about migration during the pandemic. Yet it can do so only tentatively at a time when its usual methods of reporting on immigration statistics are suspended and due to be scrapped.

On the eve of lockdown, net migration to the United Kingdom was 313,000 for the year to March 2020, with 715,000 people moving to the UK, and 403,000 people emigrating. The ONS says that the main contributor to a rise in this headline number was the rising number of non-EU nationals coming to study in the UK.

The straightforward thing to observe is that the dramatic fall in international travel in a pandemic have had dramatic impacts on immigration too. Air passenger numbers, having fallen by 95% initially, rose to around a fifth of normal levels by the Autumn. The number of long-term visas issued for work and study fell by 85% and 99% during April to June, and were back to levels 29% and 41% below the previous year by the summer and Autumn.

So the data is picking up how different people will have responded to the pandemic in different ways. Foreign nationals who are settled in the UK have mostly stayed, but people who had planned to be short-term migrants for work, in sectors like hospitality, will have been much more likely to return home. This clearly indicates there has a significant outflow of people from the country. But it is far from straightforward to link up those net changes in the labour market to migration statistics. As the ONS can’t use labour market data as migration statistics, it has not produced any estimates for net migration since the pandemic began.

So it is almost certainly the case that net migration to the UK has been negative during 2020 for the first time in a generation – even if it will take some time before there are any official estimates of the scale of that change.

In any event, the ONS was already due to overhaul the migration statistics, due to the limitations in the International Passenger Survey which particularly struggled, for example, to capture student exit data effectively. So the old basis on which the net migration figures were calculated will not return.

The pandemic therefore brings an era of migration politics and policy to a close in a very unexpected way. For a decade, the politics of immigration were dominated by the government’s unsuccessful quest to reduce the level of net migration to the “tens of thousands”. Boris Johnson ditched that net migration target on his first day as Prime Minister. Downing Street set out that the new Prime Minister “did not want to play a numbers game” on immigration.

Ending freedom of movement with a more selective policy for migration from the EU would be combined with a more liberal policy towards non-EU migration, reflecting a government approach of increasing some forms of migration – students, post-study leave, and scientists – while reducing low paid migration for work from the EU.

So it is ironic that, having ditched the target, that the pandemic has seen the government now meet it by accident, even if the official statisticians are not yet able to confirm that this has happened.

The relationship between numbers and public attitudes is complex. The salience of immigration rose after 2004 with the rise in numbers, while the dramatic collapse in salience after 2016 preceded any fall in numbers. Overall numbers remained high, because non-EU migration continued to rise even as net EU migration fell significantly. 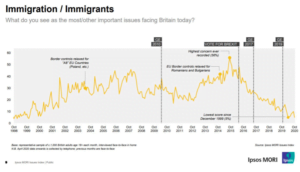 The new immigration system largely answers the question of who gets a visa to work or study in the UK. The government’s choices are mainly in line with public intuitions about different flows of migration, even if they seemed unlikely to add up to a significant drop in the numbers.

So the politics of immigration may have a different focus beyond the pandemic. The EHRC finding that the Home Office has been in breach of its legal obligations on racial equality should reinforce pressure to implement the reforms in Wendy Williams’ Lessons Learned review.

But there may be important tensions between that commitment to cultural change in the Home Office and the increasing political and media focus on the politics of asylum. Applications for asylum make up around 5% of migration to the UK. But Channel Crossings are much more visible in ways that a dramatic fall in net economic migration is not. This will place new pressure on advocates for upholding Britain’s tradition of welcoming refugees, to make that case in a way that secures broad public and political consent.

Whether there will be a different ‘new normal’ in migration levels by 2021 is harder to predict. There will be new immigration rules, and a tougher economic context. So immigration may not return quickly to pre-pandemic levels, though if it were to do so, that would now reflect the government’s policy choices under its new points-system, rather than being something that could be attributed to forces beyond political control. The government’s offer to British nationals in Hong Kong, but this could prove a more significant source of future net migration than the European Union – again, as a conscious choice of what to do having taken back control.

Securing public confidence in how immigration is managed after Brexit may depend on the Prime Minister being able to win the argument that control is not best measured by how low the numbers can go.