Teaching an inclusive curriculum: What do the students think?

As we discuss and debate ‘Teaching modern Britain: How can the curriculum include us all?’, Lizzy Lewis of Votes For Schools offers insights from classroom consultations across the country.

In October last year, Votes for Schools asked school students across the UK, Primary and Secondary, the question ‘Does the curriculum represent you?’ writes Lizzy Lewis, Head of Impact at Votes for Schools.

Teachers led discussions about representation in the curriculum, guided by our voting pack, and then some 30,000 students, in more than 800 schools across the UK, got to vote and have their say.

The results were striking. Primary students at Key Stage 2 were quite divided, with 46% saying they felt represented and 54% that they did not. But secondary students had much stronger views: only a quarter (27%) said yes, while 73% said that the current curriculum did not represent them. 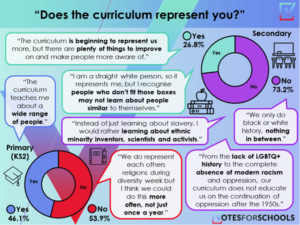 Here are some of the other comments from students who took part in the discussions:

“My friends are represented but I’m not.”

“Many of us are represented in some way, but not in others. The more diversity in the curriculum, the better represented we will feel.”

“Our curriculum doesn’t represent different races, stories, identities or genders in very positive lights, and I feel we should be learning more about these things. This would be helpful because it would help to battle racism or any other discrimination.”

Each week teachers in 800+ schools and colleges use a VotePack to prompt discussion and a vote on a current, challenging issue.

The children’s vote, the data and their comments, are made public and passed directly to influential people and organisations.

Sample questions have been: Do rich countries give enough to poor countries? Do we need a new political party? Should all toilets be gender neutral? Is being a bystander still bullying? Can sharing stories prevent extremism? Would you like to be a politician?

We have worked in partnership with organisations such as The Black Curriculum, Unicef UK, The Counter Terrorism Police, the Place2B, Anti-bullying Alliance, Children’s Commissioner, Youth Justice Board, The Times etc.

In February 2021 our Youth Advisory Board discussed diversity in the curriculum and in March this year we arranged School Focus Groups with questions on diversity in school examinations. We had 535 responses from 19 schools and colleges. All responses were sent to The Black Curriculum.

Lizzy Lewis is Head of Impact at Votes For Schools

A British Future event at 1pm today will discuss and debate ‘Teaching modern Britain: How can the curriculum include us all?’ with columnist Davis Aaronovitch, Windrush campaigner Patrick Vernon, writer Dr Samir Puri and scientist Dr Maggie Aderin-Pocock, who was a Commissioner on the recent Commission on Race and Ethnic Disparities. You can register to attend here: