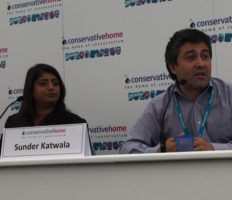 Conservatives will need to get away from the outdated idea that ‘brown people can only talk to brown people,’ and adopt a long-term strategy talking about shared values, if they are to improve their electoral appeal to ethnic minority voters, Minister Sam Gyimah told a British Future fringe event at Conservative Party Conference.

The debate, hosted together with Modern Britain and ConservativeHome, took place as the Prime Minister announced she would tackle the ‘uncomfortable truths’ to be revealed next week in a government review of the way that ethnic minorities are treated in Britain. Chairing the event Sunder Katwala, Director of British Future, opened the discussions with an overview of new British Future research showing that the Conservatives’ failure to appeal to ethnic minorities cost the party 600,000 votes in the 2017 General Election – and that closing the ‘ethnic minority voting gap’ would have secured Theresa May’s party a 42-seat majority.

Gyimah, Minister for Prisons and Probation, spoke about the attitudes he had encountered within his own party – including a ‘very right-on’ colleague telling him during the 2017 election trail that “We can’t have Sam going to Mansfield, he’s too diverse for that area.”

And he recounted a memorable earlier encounter with Baroness Thatcher, when the former Prime Minister asked which constituency he represented. “I said ‘East Surrey’,” said Gyimah, “And she looked at me, and she said ‘there can’t be many of you there’. And I replied ‘oh, yes there are.  It’s a strong Conservative seat’.” 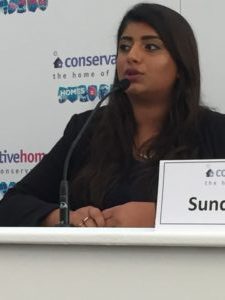 Binita Mehta-Parmar, co-Director of Modern Britain, said that the Conservatives’ failures to build on advances with ethnic minority voters under David Cameron was due in part to a lack of trust from BME voters, as well as a lack of long-term effort. Referring to her own father’s arrival in the UK as a Ugandan Asian refugee in the 1970s, she said that “The successes of migrants and refugees in Britain isn’t a point we’re making enough,” while a 2017 General Election campaign focused on a ‘caricature of white working-class voters’ may have turned-off ethnic minorities.

Paul Goodman, Editor of ConservativeHome, welcomed the Eric Pickles review of the General Election campaign, which includes among its recommendations that the party should “widen support amongst those of Black, Asian, and other ethnic minority backgrounds.” Yet recommendations such as these risked coming rather too late, he said, given the long-term struggles of the party to reach non-white voters.

Goodman’s suggestion of a longer-term strategy, and that segmented campaigning towards different minority communities would “only get you so far – you need a message for the whole country,” was echoed by Sam Gyimah. “We’re still fighting battles that we should have won ten years ago,” he said, describing a cycle of initial concern over ethnic minority votes followed by inaction, until “three weeks into the general election, someone says ‘we’ve got to do something about the BME vote’. That will not deliver the results.”

The panel agreed that the tone of debate on issues like immigration and integration was important. Local activists in the audience – from from Ealing, Redbridge and Watford – all said that the repercussions of Zac Goldsmith’s electoral campaign, which was widely felt to have overstepped the mark in focusing on his opponent’s Muslim faith, were still being felt. “Things like the Zac campaign and the ‘Go Home’ vans – people remember them in minority communities,” said Mehta-Parmar. 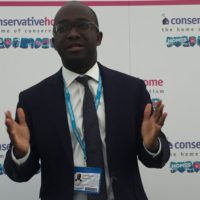 The party needed to admit past mistakes and engage with ethnic minority voters about the mistrust they may have caused, before moving on to a more positive message about Conservative values. Older BME voters remember Enoch Powell, said Sam Gyimah. “We should stand up and repudiate those comments,” he insisted. “We should be talking not about a river of blood but a tide of hope.”

A One Nation party should reach out to ethnic minority voters, Gyimah said, for reasons of principle as well as pragmatism. “It’s not just about winning the next election,” he added, “It’s about building a better Britain.”