Sense of belonging in England is increasing, across ethnicities – new research

People's sense of belonging in England has risen over the last decade, including for people from an ethnic minority background – though most of us still hold more than one identity. We could still do more, however, to make St George’s Day a moment when people from every background in England come together, to celebrate our nation and who we are.

Eight in ten people in England (80%) feel a strong sense of belonging to England, up from 72% in 2012, according to a Focaldata poll for British Future, to be published next month in a report marking the thinktank’s 10th birthday. Three-quarters of ethnic minority respondents in England feel the same.

The research also found an increased sense of belonging at local level, to people’s neighbourhoods and the towns and cities where they live. 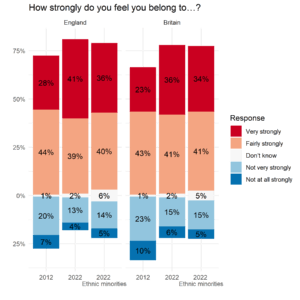 The research also asked people in England how strongly they feel English or British. The most common response was ‘Equally English and British’, selected by 44% of the public. Around one in five people (18%) feel more English than British and another fifth say they are ‘English, not British’. The findings show that people sense of identity in England – with most holding multiple identities – has changed little in he last decade.

“Most people in England have two flags and two identities, English and British. The strength of feeling for them ebbs and flows according to events – we will see a lot of Union Jacks during the Jubilee celebrations, but it will be the England flag flying for the World Cup in November.” 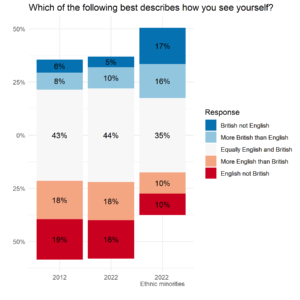 Research for British Future by Number Cruncher Politics last year found that most people in England, of all ethnic backgrounds, would support doing more to mark St George’s Day (23 April) as a way to bring people together and promote a shared English identity. Two-thirds (66%) of white people in England and 56% of ethnic minority respondents agree that “Doing more to mark St George’s Day, ensuring those from all ethnic groups are invited to take part, would be a positive way to foster a shared identity in England today.” Just 5% of white respondents and 8% of ethnic minorities disagree.

That research found that more needs to be done to ensure everyone feels invited on St George’s Day. Only 4 in 10 ethnic minority respondents felt that a St George’s Day event belongs equally to people from every race and ethnic background, while one in five felt that it does not.

“It’s good news that English identity is more open to people of all ethnic groups than it was a decade ago. But there is more work to do. St George’s Day could be a moment when people from every background in England come together, to celebrate our nation and who we are. That isn’t happening yet, so need to ensure that everyone feels invited to the party.”

Focaldata surveyed a main sample of 2,006 GB adults between 28 February-7 March 2022, with a boosted sample of 683 people from an ethnic minority background.