Americans don’t get sarcasm, the British love queues and the French like cheese. Stereotypes are often inaccurate, but can also be a useful way of finding a common identity to belong to. In his comedy sketch show The Brit Identity, Erich McElroy draws on these stereotypes to describe his long-running struggle between being American and being British, writes Georgia Hussey.

He had a stream of consciousness (and jokes) about where he came from and which aspects connected him with his different identities. Queuing to get his first British passport four years ago, for example, “that was pretty British.” Getting excited about recreating his citizenship ceremony for the show’s audience made him feel American, but realising that getting excited about it made him a “wanker” was a sign of him feeling British. McElroy ended up describing his citizenship ceremony to the audience with an anti-climactic party popper. But despite his sarcasm, it’s clear McElroy is proud to be British. He asks the crowd if they think he is British – a resounding “no” from the audience in east London, made up of Welsh, Scottish, Irish, Canadian, Polish, Australian and American. McElroy proceeds to spend the rest of the show convincing us that he really is British.

His two children, on the other hand, do qualify according to the crowd, having been born in Britain. “American body, British sperm?” he asks.

“What frustrated me is that very nice, middle class British people didn’t think I was British. That wouldn’t happen in America, because we’d all be sitting here looking at each other thinking ‘We’re American, yeah!’ ”

The audience’s unwelcoming rejection is mirrored in the process he had to go through to become British, McElroy says. “In the US we have a green card; in the UK it’s ‘Your indefinite leave to remain’. That’s how much you don’t want us here – you’ve even put leave in the name.”

He jokes how “the guide to being in the UK” he read for his repatriation included a section on how to act in a pub. “If you spill someone’s drink it is polite and prudent to buy them another. If it’s a Wetherspoons – run.” And the multiple choice questions in his citizenship test included a question on “how frequently children in the UK are given their pocket money – weekly. In Greece? Never.” 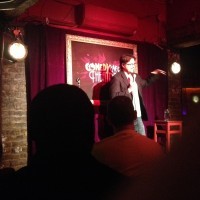 McElroy paints a clear picture of the stereotypical British pessimist. “I have the American dream with a British hangover,” he says. “Here the middle class feels guilty. They say that ‘actually we’re quite working class’. In the US we’re proud to be middle class. And working class for me is coming over and fixing my boiler and saying govn’r, or something similar, though I don’t speak Polish.”

He tells how, at the American Embassy, one of their frequently asked questions is: “Even if my son/daughter grew up outside of the US, can they still grow up to be president?” That’s representative of the immense optimism of Americans. The UK equivalent would be “can my son/daughter sign on?” he joked.

But the pessimistic and therefore slightly unwelcoming British atmosphere is actually something McElroy seems to enjoy. British customer service, or the lack of it, is one thing he’s come to love. “Go to a restaurant in America, and it’s dolphin speak before you’re done” from screechy, over-attentive waitresses. “Here, you go into a restaurant and you’re left alone. You show yourself to your table. Clean up the plates that were left from the people before you.”

He also marvels at the British ability to “take the piss”. “You have an incredible sense of humour – you can take the piss of anything in this country. Guy Fawkes for example. Someone tried to blow up your government and you celebrate it with fireworks!” The US equivalent would be a 9/11 day, he says. “That’s just not going to happen.” In reply to the slightly awkward reaction to this idea from the crowd he responds, “The fact that I do that joke and find it funny means I’ve definitely changed being here.”

“I hope that what I’ve said makes me more British than you thought,” he says. After spending the best part of an hour mocking a love of queues, the following of pub etiquette, middle class shame and fear of confrontation, while actually clearly sharing and revelling in these British traits, McElroy seems to have convinced the crowd he is a stereotypical sarcastic Brit.

The Brit Identity will be on tour at various venues across the UK. To find out more about various dates and venues and about McElroy’s story visit his website: www.erichmcelroy.com

Watch a video of McElroy quizzing the public on their British identity.