The reset moment: immigration in the new parliament

New ICM research for The reset moment: immigration in the new parliament, a new report from British Future and the Policy Institute at King's College London, finds that immigration is no longer a ‘top of mind’ issue for the public.   With the immigration debate now more open and people no longer able to claim that they're ‘not allowed’ to talk about immigration, the question is what choices we should make.

A major shift in public attitudes to immigration since the 2016 referendum gives Boris Johnson an opportunity to bring more light and less heat to the immigration debate, according to a new report from British Future and the Policy Institute at King’s College London.

New ICM research for The reset moment: immigration in the new parliament, finds that immigration is no longer a ‘top of mind’ issue for the public.  With the immigration debate now more open and people no longer able to claim that they’re ‘not allowed’ to talk about immigration, the question is what choices we should make.

The Prime Minister has a chance to restore public trust on the issue with a new, pragmatic ‘Balancer’ agenda – making his case that taking back control should mean Britain welcoming the migration we decide to keep. Rebuilding public confidence is much-needed, with just 15 per cent of respondents to the ICM research feeling that the government has managed immigration competently and fairly.

Immigration ranked ninth out of ten issues that voters considered ‘very important’ in the 2019 general election, with only 41 per cent saying that policies on immigration were ‘very important’ when deciding which party to vote for. That is compared to 74 per cent for the NHS, 59 per cent for Brexit and also behind crime, social care, education and the environment. The finding represents a significant change from 2016, when research consistently found immigration to be the public’s number one issue of concern. 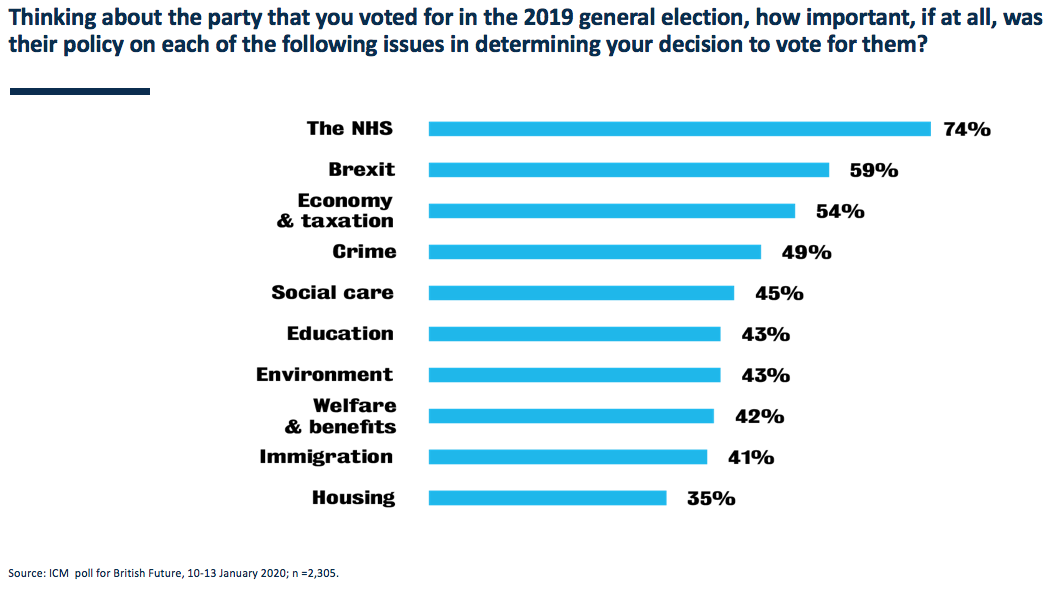 The research finds that most people are ‘Balancers’ on immigration, seeking more control of some migration and worrying about local impacts, while also recognising the gains and welcoming many types of immigration to Britain. Asked to rate the impact of immigration on the UK on a 1-10 scale (with 1 very negative and 10 very positive), most people in the UK (56 per cent) are ‘Balancers’, giving a score of 4-7.  That is true of 2019 Conservative voters (55 per cent), Labour voters (57 per cent) and Lib Dems (55 per cent).

More than three-quarters of the public would be happy for the numbers of high-skilled workers coming to the UK from the EU (79 per cent) or outside the EU (77 per cent) to stay the same or increase. Some 64 per cent would like to see the numbers of international students coming to the UK either remain the same or increase. But 51 per cent of people would like to reduce the amount of lower-skilled EU migration to the UK.

The research suggests that there would be public support for a flexible approach from government towards workers in some sectors, such as social care. Some 63 per cent of people said that there should be exceptions to a salary threshold for people moving to the UK to do important jobs that need doing, such as nurses and care workers. That sentiment was shared across political divides, with agreement from 62 per cent of 2019 Conservative voters and 67 per cent of Labour voters; 58 per cent of Leave voters and 73 per cent of Remain voters.

The report also dedicates a chapter to the need for reform and improving performance at the Home Office, including long delays in the processing of asylum claims.  It recommends increasing the Home Office budget so that it can employ more immigration officers and make better technology, finding that 52 per cent of the public would be more confident in the ability of the government to manage immigration if it made such a move.

It also finds public support for increased accountability, with 61 per cent of people saying they would feel more confident in the government’s ability to manage immigration if ministers were ‘held to account and forced to resign if they make serious mistakes’.