“Fly flags at half mast for Remembrance Day 2014”

An overwhelming majority of the British public believe the centenary of the start of the First World War is a moment that should be marked with a special Remembrance Day, new polling for British Future revealed.

83% of the country thought that bells should be rung across the country, from churches and places of worship, after the period of silence on Remembrance Sunday. This was supported particularly by the over 60s, 87% of whom were for the idea. But those aged 18 to 25 were also strongly for it, with 74% in favour.

British Future also suggested flying all flags at half-mast on Remembrance Sunday 2014, to pay respect to all British troops who have died over the years. This won almost unanimous support from the over 60s at 95%, and overwhelming support from the whole country with 87% in favour, and 57% saying that they strongly support the idea. 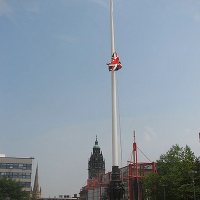 We also found out how many would be in support of clearing the day of all major sports events. 54% agreed that all Premiership games and other major sporting events should be moved to another day. However only 47% of 18 to 25 year-olds supported this idea, whereas it won backing from 58% of the over 60s.

However closing all shops on Remembrance Sunday was a less popular idea, particularly with the younger generations, with about half of those under 40 opposing the idea. Londoners were more reluctant towards this, with support 4% lower in the capital than the 44% who were in favour in the rest of the south. Overall 45% were in favour, and 45% against.

In a letter to The Times, British Future, along with a number of  writers, parliamentarians and senior military figures, made the call for the centenary of WWI in 2014 to be marked out. One of the supporters of this message, Baroness Berridge, commented: “I believe that this campaign to make Remembrance Sunday 2014 a special Sunday could play a significant part in helping the nation to remember the sacrifices that are the foundations of our freedoms today, and as a reminder of the part our history has played in making our modern Britain.”