The poppy in Ireland: to wear or not to wear?

Irish questions of remembrance and forgetting, identity and reconciliation came very much to the fore as the Battle of Ideas festival debated what wearing the Remembrance Day poppy meant, writes Sunder Katwala.

If the title “the poppy: to wear or not to wear” framed the debate around anxieties about remembrance, the event rarely polarised between for and against positions. Instead, panelists who began from different instincts about the public and private meanings of the poppy argued that its meaning had shifted over time, and would continue to do so.

The panellists, at London’s Barbican, talked about how the poppy could certainly divide opinion in Belfast or Dublin, and had sparked an argument in Glasgow between Celtic FC and some fans protesting the club’s decision to sew a commemorative poppy into the club’s shirts on remembrance weekend. But the audience also heard examples of its potential to play a bridging role too, in the complexities of family as well as political history for Irish citizens whose grandparents had died in the trenches in the British army, or illuminating a shifting sense of outsider-insider status for British citizens of Irish descent in England. 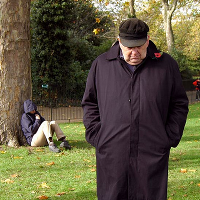 “I wear my poppy with unease,” said artist Toni Harrison. The poppy had begun as a symbol of grief, very often for those who had suffered a personal family loss in the war. Harrison worried that the message of the appeal had shifted from a “rededication of peace,” symbolising the hope that that the Great War would be the war to end all wars to a symbol of gratitude, “to thank those who sacrificed their lives so that we might be free.”

“For me it is the spirit of charity; it is not the glorification of war,” said Ruth Dudley-Edwards. “The point of the poppy is to raise funds for the British Legion to give help to those who needed it. That is why we buy and wear it,” she said. Though poppies could be deployed by some as a political symbol. “For most people, it is there to raise money, to remember the dead, and to commemorate them,” she said.

“I sometimes wear a poppy and sometimes don’t,” said children’s writer David Cox, offering a personal account of how a changing relationship with the poppy reflected his navigation of his outsider and insider sense of being born English to Irish parents.

He had first worn a poppy as what he called a gesture of “tactical hypocrisy,” a defensive desire to not to be seen to stand out. But that also offered a more active and even potentially “subversive” meaning to poppy-wearing: an effective way to challenge – and indeed to annoy – nativists who were telling you that you could never belong here was to stake a claim to their symbols, so as to show that you did. “Perhaps the really radical thing to do is not to reject the poppy, or even to burn it, but to wear it,” he said.

Over time, he had found himself gradually shifting from a broadly agnostic pragmatism – not wanting “to get hung up on not wearing a poppy,” he said, finding that rather a “toothless” form of protest – to a more active sense of identification. “I am part of it now; I am not outside of it.  This is the country where I was forged … I now see wearing a poppy as a way of integrating myself, but on my own terms. For years, I used to think this doesn’t represent me, and now I think it does,” he said.

In response to an audience member who talked about wearing a poppy when in Britain, but not doing so when visiting family in Ireland, where it would be taken to have a political meaning, Dudley-Edwards said she wanted to be able to choose to wear a poppy in the south of Ireland too. 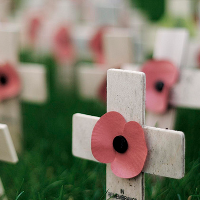 “Why do I want to wear a poppy in Ireland? I want to remember tens of thousands of Irish people who fought and died in the First World War and who disappeared from Irish history until the last 20 years. I wanted to remember and commemorate them too and I still do,” said Ruth Dudley-Edwards.

“I don’t have any problem being British and being Irish. You can be not born British and become British, while I also hold an Irish passport too,” she said, setting out how arguments over identity were reflected in her family history, including a grandmother took anti-British sentiment to support for Mussolini and Hitler, to the point of regarding accounts of the Nazi persecution of the Jews as “British propaganda” and, on the other side of the family, a grandfather who joined up to fight in the First World War, and who died in the trenches.

The session chair, Kevin Rooney, said it was good that the Irish soldiers had come “from the margins to the mainstream” with books and newspaper articles but asked if the move to commemorate their role put them beyond criticism.

“I want to say they were backward, they were wrong, they were reactionary; that they fought for the wrong side; that the IRA were progressive and they were not. Why can’t we question that?”

His challenge reflected a marked shift in Irish discourse and history, yet it was not clear how traditional Irish republican narratives, though no longer dominant, were being excluded or suppressed.

An audience member responded with the suggestion of a poppy entwined with a shamrock to remember Irish troops killed in the Great War. “Would that make a difference? Listening to the debate, maybe it wouldn’t,” they added.

Kevin Rooney, the poppy-sceptic chair of the panel, felt that poppies had grown in profile in recent years, observing that the white poppy now seemed less prominent than it had a generation ago.

Toni Harrison noted that this had confounded expectations that Remembrance Sunday might fade away as generations passed on, though he noted too that wearing of a poppy on 11th November was a minority pursuit: his own anecdotal snapshot suggested only one in ten wearing one in central London, rising to one in five in Kent.

This did also, though, put claims of so-called “poppy fascism” into question. Dudley-Edwards observed the futility of the BBC forcing presenters to wear a poppy, thereby introducing the possibility that they were being worn insincerely. Wearing a poppy was clearly a matter of choice, and panellists expressed skepticism, newsreaders aside, about their being significant social pressure to conform.

The breadth of the discussion showed how moments of remembrance are about more than commemoration, because they will also spark a civic interrogation of how and what we are remembering and why, and what questions of war and peace, history and identity tell us about our future as well as our past.  So the panel saw the forthcoming centenary of the Great War as an important moment for a civic interrogation of what we remember or why, while wanting to suggest different ideas as to how that conversation might develop.

Harrison, suggesting that it was unusual for a remembrance discussion in London to be quite so focused on the Irish dimension, proposed the centenary could bring about broader changes, to avoid the “sentimentalisation” which he feared could sanitise war. There was an opportunity to turn the poppy into a universal symbol of remembrance, he said: “there is a whole poetic symbolism to the poppy which could be used for peace, rather than to fight old battles again.”

Another audience member suggested more might be done to separate the purposes of commemorating the dead; raising charitable funds; and to reflect on what the history means for society today, recognising that some people wanted to engage in these different spheres.

Dudley-Edwards suggested the centenary of the Great War offered an important chance to unpack the idea of remembrance in this way. “We have two years to get it right,” she said.