On 31 October 1914, Sepoy Khudadad Khan became the first Indian soldier to be awarded the Victoria Cross. He was one of millions of soldiers from pre-partition India, from Africa and the from Caribbean, who served in the World Wars. The Remember Together campaign seeks to ensure that their service and sacrifice are remembered today, helping our tradition of Remembrance to be a moment that brings people of all ethnic backgrounds together in modern Britain. 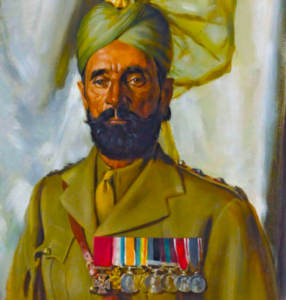 On 31 October 1914, Sepoy Khudadad Khan of the 129th Baluchis became the first Indian soldier to receive the Victoria Cross. Sepoy Khan, a Muslim from what is now Pakistan, had single-handedly held off the enemy with his machine gun, despite being badly wounded, until reinforcements could arrive. He was presented with the Victoria Cross medal by King George V himself.

Khan was one of over a million soldiers from pre-partition India who served in the First World War.

One hundred years later, prominent voices from politics and the military, faith and civil society, wrote to the Daily Telegraph urging greater efforts to commemorate Khudadad Khan’s bravery and service. “It is important today that all of our children know this shared history, of contribution and sacrifice, if we are to fully understand the multi-ethnic Britain that we are today,” they argued.

The Remember Together campaign, coordinated by British Future and the Royal British Legion, aims to bring people from different backgrounds together in Remembrance of our shared history. It highlights and celebrates the service and sacrifice made by servicemen and women of all creeds and colours, engaging new audiences and helping make our national tradition of Remembrance feel relevant and inclusive to everybody in Britain today.

Find out more at www.remembertogether.uk

As we soon come together to remember all those whose lives have been lost in conflict, we wish today to highlight one man whose service exemplified the courage of many who served in the First World War.

One hundred years ago to this day, 31 October 1914, Sepoy Khudadad Khan of the 129th Baluchis became the first Indian soldier to receive this country’s highest award for valour, the Victoria Cross.

Khan’s regiment was supporting the British Expeditionary Force to prevent German troops taking vital ports in France and Belgium. As the line was pushed back the machine gunner, badly wounded and massively outnumbered, held off the German advance long enough for Indian and British reinforcements to arrive and prevent the enemy making the final breakthrough. He was the sole survivor of his team.

The First World War brought together soldiers from across the Empire and Commonwealth to fight for Britain. Born in what is now Pakistan, Khan was just one of the 1.2 million Indian soldiers, and the 400,000 Muslims, who fought alongside British troops in 1914.

It is important today that all of our children know this shared history, of contribution and sacrifice, if we are to fully understand the multi-ethnic Britain that we are today.

The gallant Sepoy Khan embodies that history. Just as King George V honoured his bravery 100 years ago with the Victoria Cross, let us all honour and remember him today.

Elizabeth Berridge (Baroness Berridge of the Vale of Catmose)