Viv Anderson: The Man Who Changed the Face of English Football 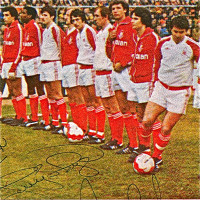 Today, writes Sathesh Alagappan, English football is perhaps one of the great symbols of modern, multi-ethnic Britain. In stadia across the country, players from all corners of the world play alongside black, white and mixed-race British players to appreciative fans. The ethnic diversity of the England squad for Euro 2016 will barely be noticed by supporters. Yet, this has not always been the case.

Up until the 1970s, black players were a rare sight on the football pitch. The handful who did make the breakthrough faced a constant torrent of racist abuse. However, they were pioneers who helped change perceptions of race in British society, and set the foundation for generations of black footballers to thrive afterwards.

Particularly significant in this was Viv Anderson. The gifted defender was a central part of a hugely successful Nottingham Forest team, and in 1978 became the first black footballer to play for the English national team.

Viv Anderson was born in Clifton, Nottingham in 1956. He was the son of West Indian immigrants, part of the wave who came over to Britain after the Second World War. The arrival of immigrants from the Commonwealth was hugely divisive, and the reception they received was often less than welcome. Racial discrimination in housing, employment and everyday interactions was rife.

Anderson would have grown up at a time when football was essentially an all-white affair, both on the pitch and on the terraces. In fact, Clyde Best, the Bermudan striker who made his debut for West Ham in 1968, would have been the only high-profile professional black player at the time.

Nevertheless, the young Viv Anderson quickly took to football. Playing throughout his schoolboy years, he was eventually picked up at the age of seventeen by his local team Nottingham Forest.

The manager at the time was the legendary Brian Clough. Clough was a charismatic, unorthodox and bullish character, with a passionate hatred of racism. He had been a prominent advocate of the Anti-Nazi League and had even given the group free advertising space in Nottingham Forest match programmes. In his reign, he would go on to kick start the careers of several promising black players.

Anderson broke into the senior team in 1974. Usually, he would be the only black player on the pitch, and found himself an easy target for racist abuse from the start. In a match against Carlisle, Anderson was told to warm up on the sidelines, only to be showered with bananas thrown from the crowd. This was virtually a weekly occurrence, and an overwhelming experience for a young man.

It was something experienced by the handful of other black players emerging at the time. At West Brom, the trio of Regis, Cunningham and Baston were greeted with a volley of racist bile wherever they played. Regis even had death threats and bullets mailed to him. It reflected an increasingly toxic strain of British society. The 1970s was a time of growing unemployment, inflation and urban decay. This proved the breeding ground for the rise of the far-right group National Front, who actively recruited disaffected working class football fans.

Anderson recalls how the vitriol would have forced him out of the game if it wasn’t for the advice he received from Clough:

“It was so hostile that I said to Brian Clough when I got back to the dressing room, ‘I don’t think I can play tonight, boss’.

He told me in no uncertain terms I had to play. He said if I wanted to forge a career in the game I had to ignore these people, rise above the chants and let my football do the talking.”

And that’s exactly what Anderson did. Known as the ‘spider’ on account of his tall gangly frame and gritty industrious playing style, he became Forest’s first choice right back, and a pivotal part of the First Division winning side of 1978.

By 1978 he could no longer be ignored by England, and national team manager Ron Greenwood called him up for a qualification match against Czechoslovakia. It caused much comment in the press. Greenwood, for one, seemed to be less concerned with the colour of Anderson’s skiin, commenting ““Yellow, purple or black – if they’re good enough, I’ll pick them.”

Anderson impressed in his debut, putting in a solid defensive performance and playing a hand in the only goal of the game. In the long term the result proved to be academic, for it would be remembered as a watershed in the game, and indeed British society.

Anderson’s achievement laid the groundwork for a host of black players to represent the Three Lions. Shortly afterwards, West Brom’s Laurie Cunningham made his debut. He was followed by the likes of Cyril Regis, Luther Blissett and John Barnes.

Anderson went on to have a glittering career in football. With Forest, he was a stalwart of the team that won consecutive European Cups in 1979 and 1980, before having successful spells at Arsenal and Manchester United. He also went on to gain 30 caps for England.

His legacy, however, would be altogether greater. The image of a positive black role model playing side-by-side with his white teammates helped change perceptions. His exploits also encouraged countless young black men into the game. As non-white players became increasingly visible in English football, the entrenched racism on the terraces began to erode away.

Anderson remains a vocal anti-racism campaigner, and is now an ambassador for Kick It Out. He was awarded an MBE to recognise his achievements.

Today the English national team is a mirror of the diverse nature of the nation, as reflected by the new #WeAreAllEngland campaign, which aims to show how the England team brings people of all backgrounds in England together behind their national team. When the European Championships come around the summer, players such as Deli Alli, Danny Rose and Nathaniel Clyne will proudly wear the Three Lions on their chest. In that regard, they stand on the shoulders of giants such as Viv Anderson.