Remember Together is a British Future project, supported by the Royal British Legion and the Together Coalition, which brings people from different backgrounds together ahead of Remembrance Sunday to learn about and commemorate our shared history.

It highlights and celebrates the service and sacrifice made by servicemen and women of all creeds and colours, helping to make our national tradition of Remembrance feel relevant and inclusive to everybody in Britain today.

In 2021 we are working with students at two secondary schools, in Rochdale and east London,  to bring new meaning to Remembrance this year by uncovering the stories of black and Asian WW2 contribution from within their own communities.

The project hopes to help make Remembrance an inclusive moment that brings people together. It also aims to address the lack of public awareness of black and Asian contribution to the Second World War. Over 2.5 million soldiers from pre-partition India – what is now India, Pakistan and Bangladesh – served alongside servicemen and women from Africa, the Caribbean and other commonwealth nations.

Students at Falinge Park High School in Rochdale, Greater Manchester, and Eden Girls’ School Waltham Forest, a Muslim girls school in East London, appealed to local people to come forward with their family stories of relatives who served in the Second World War. The students then became historians themselves, interviewing the descendants of these WW2 veterans and documenting their stories on the school websites.

These short films of the projects tell some of the stories of family pride in WW2 service that we uncovered. A community event at the London school on the eve of Armistice Day premiered their film to the local community, with students talking about their experience of the project, alongside speakers from the Armed Forces Muslim Association and campaigners We Too Built Britain.

Remember Together in 2020
In 2020, Mayor of London Sadiq Khan and former Home Secretary Sajid Javid, actors Adrian Lester and Meera Syal, WW2 veterans and former heads of the armed forces Lord Dannatt and Lord Richards are among those to sign an open letter urging that “more should be done to highlight the role of soldiers from across the Commonwealth, ensuring their contributions are reflected and acknowledged, and that Remembrance activity is truly inclusive.”

The letter urges that we “ensure all who served are fully recognised, through better education, commemoration and documentation of our shared history.”

New polling for British Future finds that eight in ten people (78%) agree that doing more to recognise the Commonwealth contribution in World War Two would be a positive way to promote understanding of the shared history of today’s multi-ethnic Britain. The sentiment is felt equally by white Britons (78%) and ethnic minority Britons too (76%). Just 3% of people disagree. 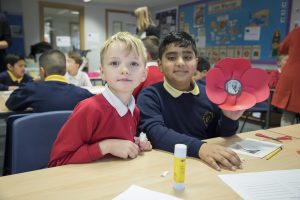 In 2019, Remember Together reflected on the 75th anniversary of D-Day, remembering how Britain and its allies in the Commonwealth, the US and the free armies of Europe fought side-by-side in the Second World War. Remember Together events in Leicester and in Boston, Lincolnshire brought together ethnic minority and white Britons and Eastern European communities to mark this important history that we all share – reminding us that Remembrance is for all of us.

Remember Together Leicester brought together people from the city’s diverse communities to learn about the soldiers who fought side-by-side in the Second World War and why we all remember them today, with talks from historians, veterans and serving soldiers.

Inspired by the ‘Indian Comforts Fund’, which sent 1.6 million parcels of food and warm clothing to Indian frontline soldiers and Prisoners of War, participants also tried their hand at an interactive workshop making chocolates and Indian sweets – delivered by Leicester’s Ministry of Chocolate.

The Indian Comforts Fund was coordinated by the Indian Red Cross and St John’s Ambulance, white British and Indian women worked together to pack parcels, including dhal, ghee, curry powder and Indian sweets, along with warm clothing created by 100,000 volunteer knitters around Britain.

Participants shared food  and learned more about their shared WW2 history, hearing from 96-year-old Polish WW2 veteran Wanda Szuwalska and the Royal British Legion. Wanda joined the RAF after Poland was invaded. She was posted to 300 Squadron – based for a time in Lincolnshire – where she directed aircraft on the ground and worked as a driver.

75 years ago in 1944 Britain’s allies from the Commonwealth and other nations, who had fought shoulder to shoulder with Britain since the start of the Second World War, collaborated to secure victory in three critical battles: Monte Cassino, Kohima and Imphal and the D-Day landings in Normandy.

Between January and May 1944 nearly a quarter of a million troops from six continents fought in four battles on and around Monte Cassino and the town of Cassino in Italy. They suffered heavy casualties: by the time Polish troops captured the summit of Monte Cassino, Allied armies had suffered over 54,000 casualties. Cassino cemeteries testify not only to the loss of so many but to the mix of nations and forces involved, including Britons, pre-partition Indians, Maoris from New Zealand, Poles, Americans, Moroccans and South Africans.

The battles of Kohima and Imphal changed the course of the war in South East Asia, dealing the Japanese Imperial Army its greatest defeat.

Allied troops of the 14th Army comprised British, pre-partition Indian, Gurkha and African troops from Ghana, Nigeria, Sierra Leone, The Gambia, Kenya, Uganda, Malawi, Tanzania, and Zimbabwe. They were supported by Naga tribes of North East India and Burmese hill tribes. At the core of this multi-cultural, multi-national force was the British-Indian army, the largest volunteer army in history. At its height, this force consisted of approximately 2.5 million men.

The battles of Imphal and Kohima cost the Japanese Imperial Army dearly. Of the 85,000 men that started the battles 53,000 were killed or declared missing. The 14th Army suffered nearly 17,000 casualties. The legacy of the battles of Imphal and Kohima echoes on in the inscription taken from a cemetery for British soldiers who fell at Kohima. That inscription we know as the Kohima Epitaph:

“When You Go Home, Tell Them of Us And Say,
For Your Tomorrow, We Gave Our Today”.

D-Day, 6 June 1944, ranks among the most significant battles in history, marking the beginning of the liberation of France and Western Europe. It drew on the knowledge of meteorologists, scientists, inventors and the combined militaries of 13 nations. They were assisted by tens of thousands of members of the French Resistance. By the end of D-Day Allied forces had suffered nearly 10,000 casualties, of which 4,000 were fatalities.

In addition to those from the UK, D-day forces included sailors, soldiers and airmen from the USA, Canada, Australia, Belgium, Czechoslovakia, France, Greece, the Netherlands, New Zealand, Norway, Poland and others.

In 2018, as Britain marked the end of the First World War centenary, Remember Together brought people together to commemorate those who fought for Britain a century ago – including over a million Indian soldiers, 400,000 of them Muslims from present-day Pakistan.

Imams in mosques around the country gave remembrance-themed services at Friday prayers. A Remember Together event in Birmingham  brought together Imams from across the UK to learn more about the Muslim contribution to WW1 and the Islamic context of Remembrance.

In Bradford, London and Derby primary and secondary school pupils and families from different ethnic and faith backgrounds came together to learn that soldiers from all backgrounds fought side-by-side, and make poppies to remember them. Poppy wreaths made at the events were laid at local war memorials as part of Remembrance Sunday services in Walthamstow, Bradford and Derby on 11 November.