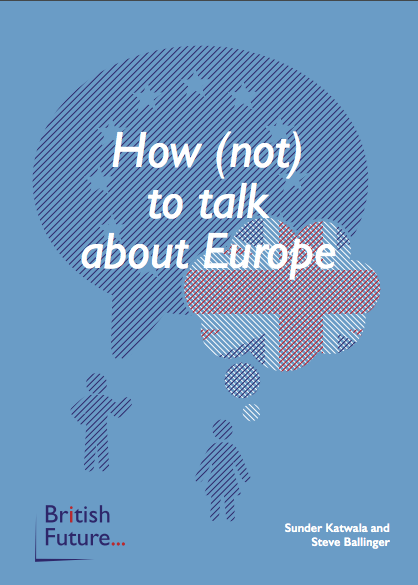 Should we stay or should we go? Britain’s referendum on our membership of the European Union looks set to dominate the politics of 2016.

It’s an important moment for Britain, a chance for voters to provide a definitive answer to a question that has hung over politics for a generation. It is a referendum that could go either way, with most voters yet to fully decide which way they will vote, or indeed whether they will vote at all.

Yet despite this, both the ‘In’ and ‘Out’ campaigns use arguments and messages that appeal to their own supporters but fail to persuade the undecided voters who will determine the outcome of the referendum.

Drawing on new research into public attitudes to the EU referendum, How (not) to talk about Europe looks in more detail at these undecided voters and how the messages used by both campaigns fail to appeal to them.

It provides advice to pro-EU and anti-EU advocates alike on how not to talk about Europe, analysing the challenges that both campaigns experience when engaging key issues for voters such as identity, immigration and the economy.

It suggests strategies for an approach to the referendum that could engage a wider cross-section of the public and looks at the benefits that a high-engagement, high-turnout referendum could bring to our public discourse and politics.

How (not) to talk about Europe will be useful to those in civic society, politics and business engaged in this big debate about Britain’s future – and to citizens taking part in one of the most significant decisions facing the country.