Friday 27 August 2021 is #PositiveTwitterDay – a moment to think about what we can all do to make social media a more civil place. Steve Ballinger discusses what the day is about and how you can take part.

Today our political discourse and our society can feel a lot more divided than any of us would like, writes Steve Ballinger. That’s particularly the case on social media, where debate seems to escalate quickly into abuse.

There will always be disagreement on the big issues of the day. But in real life, most of us can disagree without shouting at each other. It seems we apply different rules on social media – but do they have to apply? Couldn’t we decide to change them?

Positive Twitter Day – Friday 27 August this year – is an attempt to do just that.  It isn’t about getting everyone to agree with each other; rather it is about us as participants and what we can do to promote more civil political debate online. It’s about disagreeing better: asking what can we do, as social media users, to set the norms of online behaviour that we want to see.

The deplorable online racism directed at England footballers has highlighted how social media companies need to play their part too. Much racist speech is still ruled onside by Twitter’s current guidelines. Trolls who are banned from the platform can be back online the next day under a new identity.

There is a strong public appetite for social media companies to step up, and research finds a broad, inter-ethnic consensus for greater action to tackle online hatred. Three-quarters of ethnic minority citizens (72%) and three quarters of white British citizens (72%) agree that social media platforms need to take stronger action to remove hate speech, according to polling by Number Cruncher Politics for British Future. Just 7% disagree.

But we can all play our part, too, in making Twitter a more civil space. You can participate in Positive Twitter Day in a number of ways:

We also want to use Positive Twitter Day to spark a broader conversation – on Twitter and elsewhere – about how we, as users, can shape the norms that we want on social media. There’s a lot of agreement that social media can be angrier than it once was – but not enough discussion about what we can do to change that.

Positive Twitter Day won’t, on its own, change the way we discuss and debate online. But it can show us that civil debate is possible on social media – and perhaps that it can be a bit more enjoyable than a shouting match.

So we hope you’ll join us for Positive Twitter Day on Friday 27 August. 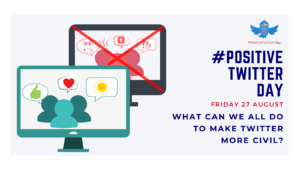