What do people in Wales think about immigration?

With Brexit promising a reset moment on how the UK handles immigration, writes Chris Lees, understanding public opinion on such an important issue is increasingly important. Views in Wales have been somewhat overlooked in a UK-wide debate dominated by the polarisation between ‘liberal’ London and Scotland, and Leave-voting areas in the north and east of England. Tonight the BBC One Wales programme, The Hour, will debate the issue of immigration in Wales with British Future Director Sunder Katwala one of the voices featured in the discussion.

British Future conducted GB-wide opinion polling in June 2017, the findings of which were published in the September report Time to get it right: Finding consensus on Britain’s future immigration policy. The poll included a sample of 527 people in Wales, from which it is possible to pull specific findings for Welsh public opinion on immigration.

Our poll asked the respondents whether they would like to increase, maintain, or decrease the numbers of specific groups of migrants entering the UK. The vast majority in Wales (88%) would like the number of skilled migrants coming to the UK from inside and outside of the EU to either increase or stay the same. Majorities would like to see international student migration (79%) and immigration to join immediate family (61%) remain the same or increase. However, majorities of Welsh people would like to see reductions in the numbers of low-skilled migrants. 65% would like low-skilled EU migration to be reduced, rising to 68% for low-skilled immigration from outside the EU. These percentages are generally not too dissimilar from those in the rest of Great Britain. For example, 64% of the total polled would like low-skilled EU migration to be reduced and 67% for outside of the EU. People in Wales are slightly more likely than those in other parts of the UK to want certain flows to increase: for example 40% of people in Wales would like more high-skilled non-EU migration, compared to 36% overall in the UK. 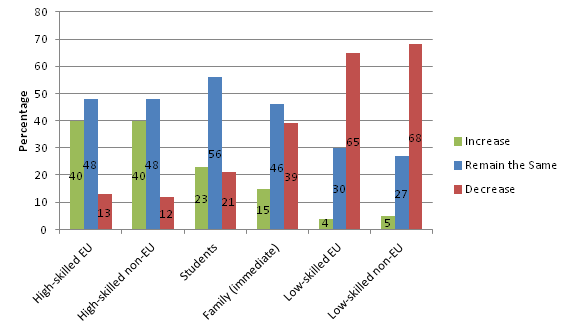 Opposition to general low-skilled migration decreases when the public is asked about specific professions. Majorities in Wales and across the UK would not reduce the number of people coming to Britain to be care workers (72%), construction workers (61%), and fruit-pickers (62%). The only specific low-skilled occupational group that a majority of the Welsh public (52%) would like to see reduced was waiters and bartenders. 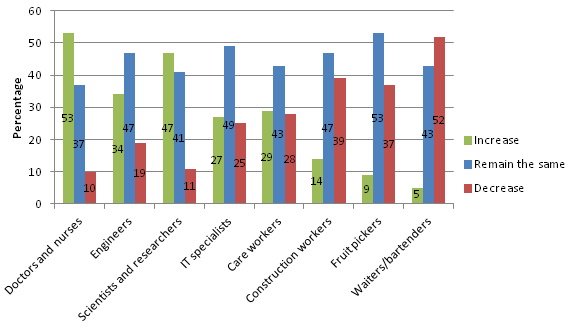 The people of Wales are moderate balancers who see the upsides and downsides of immigration. Seven in ten people in Wales (71%) agree with the statement that: ‘Immigration brings pressures as well as gains and our decision to leave the EU gives us a chance to change the system. What we need now is a sensible policy to manage immigration so we control who comes here but still keep the immigration that’s good for our economy and society, and maintains our tradition of offering sanctuary to refugees who need our protection.’ Just 6% disagree.

Asked about approaches to immigration after Brexit, more than six-in-ten of people in Wales (64%) back a compromise approach to immigration from the EU, controlling low-skilled immigration to the UK through an annual cap while allowing skilled migrants to come to the UK as before. 13% disagree. 40% of people in Wales said they would keep freedom of movement for EU citizens in the UK and Britons in EU countries. Whilst just under a quarter (24%) would like to stop all EU migration.

Overall, while marginally more liberal on some questions, it would appear that attitudes to immigration among voters in Wales are remarkably similar to those of the British public as a whole.

Chris Lees works as a paid intern at British Future. ‘The Hour’ debate on immigration is on BBC One Wales tonight at 10.40pm