When the parents of Olympic champion Jessica Ennis, who are from Jamaica and Derbyshire, met in Sheffield in the 1980s, a majority of the public opposed to mixed race relationships. This is no longer the case, shows the new report from British Future The Melting Pot Generation: How Britain became more relaxed on race. 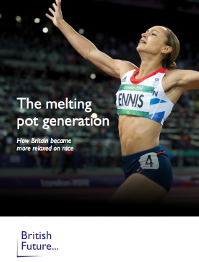 Concern about mixed race relationships has fallen from 50% in the 80s to just 15% in 2012, with only one in twenty aged 18 to 24 thinking it’s now an issue. Polling for British Future showed that young people are actually more comfortable with mixed race marriage than a range of other factors, including marrying someone from a poorer background.

The polling, carried out by BritainThinks, shows a dramatic shift in British attitudes. The Melting Pot Generation report explores this change, and looks at how the Jessica Ennis generation, who have grown up knowing mixed Britain as the norm, now feels about race and identity.

The polling found that almost two thirds are comfortable with their children marrying someone of a different ethnic background, and that those from black and mixed race backgrounds are more likely to be comfortable with interracial marriages than white or Asian respondents.

Have a look at all the charts of BritainThinks’ polling for our Melting Pot Generation report.

And you can find a more detailed look at the numbers from the polling here.

Our report in full: The Melting Pot Generation: How Britain became more relaxed on race.