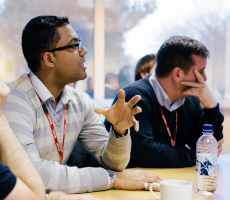 The National Conversation on immigration aims to hear the views of people all over Britain. For the whole of 2017 we’ll be in a different town every single week, in every region and nation of the UK, listening to what people think on the issue.

There are going to be changes to immigration policy in the UK following the vote to leave the EU. It’s a time to ask people ‘what do you think should happen now?’ and for decision-makers to listen to what they have to say.

People have different points of view on immigration and that can be divisive – but the National Conversation is a chance to bring people together to talk about their differences and find common ground.

It’s up to all of us as citizens, whatever our views on immigration, to take part in this conversation if we want to have a say. The findings of the National Conversation will form part of a major Home Affairs Committee inquiry into immigration, led by influential MPs. It will publish its findings and recommendations in a report that the Government has to then respond to. It’s a chance to have your voice heard by decision-makers.

How does it work?
In 60 towns and cities in every region and nation of the UK, we’ll be hosting citizens panels to ask people what they think about immigration and the immigration system; we’ll also hold a stakeholder meeting in each of those towns with local business leaders, community groups, local councils and others with an interest in the topic.

An online survey will give a chance for everyone to have their say, even if we’re not coming to their town. And national opinion polling will give us another way to find out what people think about the issue.

The first locations we’re visiting are: Bradford in West Yorkshire, March in Cambridgeshire, Witley Bay in North Tyneside, Aberdeen in Scotland, Enfield in London, Trowbridge in Wiltshire, Methyr Tydfil in Wales and Macclesfield in Cheshire.