Key voices on both sides of EU debate ‘harming own cause’

Prominent voices on both sides of the EU debate risk harming their own cause, according to a new survey revealing public distrust of two of the referendum’s loudest voices – Tony Blair and Nigel Farage.

The survey also highlights just how open a race the EU referendum remains, with over 70% of the public still not fully decided where they stand on the question of Britain’s EU membership.

Tony Blair is the least-trusted politician in the EU debate, followed closely by Nigel Farage, according to the poll by Survation for British Future, released on the 40th anniversary of the 1975 referendum on Britain’s membership of the European Union.

The findings highlight how vocal advocates in both the ‘pro’ and ‘anti’ camps in the EU debate may be turning-off the very voters they need to persuade. In Farage’s case, the UKIP leader appeals to existing supporters but repels the majority of British citizens who remain undecided about Britain’s place in Europe. The survey finds that Tony Blair is distrusted by the public whether they are ‘in’ or ‘out’, ‘decided’ or ‘undecided’ alike.

Nearly six in ten (59%) people distrust the former Prime Minister when he talks about whether Britain should remain in the EU, with just 28% saying they trust him on the issue, according to the poll. Mr Blair is even distrusted by those whose views on Britain’s EU membership align closely with his own: only 42% of those who say they are definitely voting ‘in’ trust the ex-Labour PM, compared to 46% who say they distrust him.

Nigel Farage does not fair much better, with 54% saying they don’t trust him on the EU debate, and just over a third of the public (36%) saying they do. Although the UKIP leader is trusted by three-quarters (74%) of those definitely voting ‘out’ in an EU referendum, he is such a polarising figure to non-Ukippers that support for the EU has actually increased while UKIP has grown in prominence. 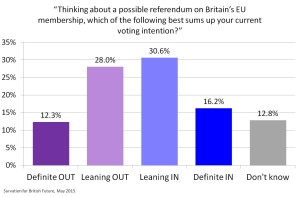 Over 70% of Britons are still not fully decided on how they would vote in a referendum on Britain’s EU membership and are waiting to see what deal David Cameron can strike with other EU leaders. Most have a preference but remain uncertain: they are the ‘Leaners’, with 31% saying they are “leaning towards voting to stay in the EU” and 28% “leaning towards voting to leave the EU”. Both say they want to know what the conditions are before making up their minds. 13% simply can’t choose, answering ‘don’t know’.

With just 16% saying they are ‘definitely in’ and 12% ‘definitely out’, the race remains wide open for both teams in the EU debate. It is the ‘Leaners’ and ‘don’t knows’ who will decide whether Britain stays in Europe: the side that reaches this group with its arguments may turn out victorious when the ballots are counted in 2016 or 2017.

Neither appears to be have the answer so far.

The politician most trusted when talking about whether Britain should remain in the EU is Prime Minister David Cameron on 49% – perhaps unsurprisingly straight after his election victory. The PM remains distrusted on Europe by 41% of the public, predominantly those whose minds are firmly set for ‘in’ or ‘out’. Cameron’s appeal is strongest among the ‘Leaners’.

If both sides in the referendum are serious about persuading the 51% of voters they will need to win, we may start to hear more from these voices – and less from those whose appeal is restricted to the already-converted.