“Mongrel nation”: How is the face of Britain seen now?

Twenty years ago Time magazine put a composite photograph on its front cover. It was generated by an IBM 486 computer and fused together the phenotypical features of the world’s six main racial groups. The face that emerged was that of a woman with a striking, yet blended, appearance. The purpose was to sneak preview a mid-twentieth century future in which growing global migration and cross marriage would produce Global Woman, writes Shamit Saggar, professor of political science at the University of Sussex. 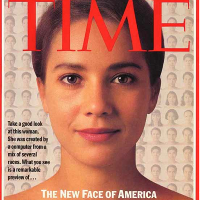 Many younger people in Britain today would, if scientifically surveyed, probably acknowledge her beauty. A fair slice would perhaps welcome what she represented. But a distinctive group – a minority, I guess – would be alarmed, sensing that something with value had, or was being, lost.

In the early 1980s the British Attitudes Survey launched a battery of social distance questions. One had to do with Brits (mostly white) accepting a black or Asian person as an in-law. Many would not, or would not like to. Since then, the accepting/celebrating numbers have surged, in part because mixed heritage children are so much more common. No-one really knows, with precision, whether attitudes have softened because older sceptics have died off, and/or people have adjusted to practices surrounding them, and/or the public has responded to messages about the values of mixing cultures as well as people.

Twelve years ago, a Tory MP, John Townsend, spoke out about Britain becoming a “mongrel nation”. At that time, he was only mildly rebuked by a leadership that felt compelled to balance between strong nativist sentiment and demographic trends pointing elsewhere. A similar outburst today might be first, less expected, and secondly, clash with Conservative leaders’ emphasis on inclusiveness.

But a lot depends on how fast, where and among whom intermixing is happening. The imminent Census figures will confirm a picture that for many is already a lived experience. But for a fifth to a quarter Brits, the numbers will be a quantitative reminder of an idea that is unsettling and possibly frightening. This constituency will mostly keep their distance, emotionally, culturally and physically. From what is not so easy to describe. It will need some fresh nomenclature, for sure.

iShamit Saggar is a professor of political science at the University of Sussex.