Figures from the latest Ethnic Minority British Election Survey (EMBES), in an Economic and Social Research Council (ESRC) study published by the Oxford University Press, show that over half of Pakistanis and 46% of Bangladeshis in Britain say that they wear the poppy to mark Remembrance Day. 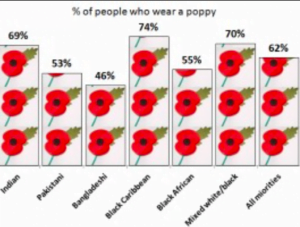 Using figures from the 2011 Census in England and Wales, British Future calculates that these findings equate to approximately 800,000 poppy wearers from these two communities alone, who make up two-thirds of Britain’s 2.7 million Muslims. This figure grows to over a million once the remainder of Britain’s Muslim community is considered, based on the EMBES study’s findings on poppy wearing among African, Indian and other British ethnic minority communities.

The figures show just how marginal the views of extremists like Anjem Choudary really are, with significant numbers of British Muslims supporting the wearing of poppies as an act of remembrance at this time of year.

Of course everybody makes up their own mind about the poppy and whether to wear it or not. Some people I know choose not to as they feel it glorifies war; many others wear it with pride, even if they are broadly anti-war, because they feel the poppy is about remembering those who lost their lives. What these findings reveal is that Britain’s Muslims are much like the rest of us.

They want to drown out the marginal views of extremists like Choudary, who in a statement this week said that those who sell poppies today will “burn in hellfire tomorrow.”

“These figures show that most ordinary British men and women of Muslim background are just like the rest of us when it comes to Remembrance Day. As they go about their daily business as British citizens we should acknowledge this quiet yet profound form of integration.

“My grandfather served in the British army and was a Prisoner of War in Asia. Like a million other British Muslims, I feel it is important to remember and honour the sacrifice of those who fell while defending us. That’s why I wear my poppy with pride.”

Regrettably there are no comparable figures in the election survey for poppy wearing among the white British population, as the question was only part of the ethnic minority survey. Professor Anthony Heath and colleagues write that they estimate that “the white British proportion would not be much higher.”