Jessica Ennis has been the face of Britain in 2012.  She could stake a fair claim to be “the face of the census” too.

She had to travel past 20 foot posters of herself on the way to compete at her home Olympics, but responded with such a strong performance as to turn the final event of the Heptathlon, the 800 metres, into a double lap of honour. With gold assured, she provided one of the indelible images of our Olympic summer, making sure to sprint first to the line, arms outstretched, breaking through the imaginary finishing tape, arms outstretched, in true Chariots of Fire style.

As Ennis says in her biography, Unbelievable:  ‘I was unaware at that point that what people would call the greatest night in British athletics – some would even say British sport – was unfolding. I won at 9.04pm. Greg [Rutherford] won the long jump at 9.26pm, by which time Mo [Farah] was a 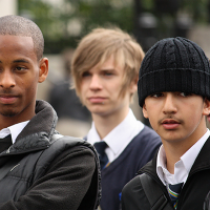 few laps into the 10,000 metres final. When he won in the most dramatic fashion, we had three gold medals in less than 45 minutes. Given that we had only won one Gold medal in Beijing, it was an incredible gold rush.’

It was Team GB’s finest hour, halfway through that Olympic fortnight. Britain’s best-selling tabloid, The Sun, was most vocal in suggesting no casting director could have picked a better trio:

‘It was 46 golden Olympic minutes when three young Britons showed the watching world just who we are.  A ginger bloke from Milton Keynes, a mixed race beauty from Sheffield, an ethnic Somali given shelter on these shores from his war-ravaged homeland.  This is what Britain looks like today … The long-term social ramifications of these Games remain to be seen. Yet the sight of these three Olympians wrapped in the Union Flag will surely do more to inspire than any political words.’

Mo Farah was central to this idea of a ‘new Britishness’.  The idea that, in 2012, the flag still needed “reclaiming” from the far right was rather puzzling. “There Ain’t No Black in the Union Jack” was a ‘seventies and ‘eighties street slogan of the NF, long ago decisively rejected by a broad majority. There had been no debate, nor novelty, about Linford Christie and Kris Akabusi’s claim to the flag at the Barcelona Games, twenty years earlier, following 1980s stars Daley Thompson and Tessa Sanderson. But Farah also represented three of the forms of otherness – being Somali-born, a Muslim and having a refugee-like trajectory – most often villified in the anxious decade after 9/11.

The coincidental timing of their Gold medals saw Ennis and Rutherford co-star in this modern British triptych. The Sun also celebrated how immigration that had made Jessica Ennis possible, ‘Immigrants like heptathlon queen Jessica Ennis’s dad Vinnie who arrived in this country from Jamaica at the age of 13. Vinnie grafted as a painter and decorator and met Alison Powell, a social worker. Their daughter Jess, 26, was born in the steel city of Sheffield.’

That was an unusual way to write about Jessica Ennis. New research by the Migration Observatory at the University of Oxford, analysing two million words of national newspaper coverage mentioning Ennis and Farah for British Future, capture how she is much more often associated with her Yorkshire roots than her ethnicity. Articles involving Ennis saw 46 times as many mentions of “Sheffield” as there were of “mixed race”(though her ethnicity was referenced a little more often when articles featured Farah too). Articles involving Farah saw Somalia mentioned 26 times more frequently than Hounslow in West London.

The research findings support the intuitive hypothesis that Ennis is discussed much more as a young woman from Sheffield than the daughter of a Jamaican immigrant. They illuminate too why Farah still had to respond after his race to the question of whether he would have been prouder still to have won for Somalia, saying “Not at all, mate! This is my country”. Both are celebrated as equally British, but via different routes. Mo Farah became of us, but we don’t think of Ennis, the British-born daughter of an immigrant, as having had a journey to belonging too.

That media discourse would seem to fairly accurately reflect Ennis’ subjective sense of identity too. She explains her lack of attention to race in her biography when retailing a solitary incident of racism, contrasting that to the experiences of her father a generation earlier:

‘The one time my Dad did intervene was when a girl at school said something racist about me to my friend Charlotte. She told me, I told my parents, and Dad went round to the girl’s house and shouted at her on the doorstep. It probably unearthed old wounds for him, but it is the only time I have ever encountered anything like that. I never consider the colour of my parents and I was amazed when I saw on twitter that someone had posted a message: “Jessica Ennis’s dad is black – I can’t believe it”. What couldn’t they believe?’

Ennis does write about being bullied at school – “I was small and scraggy and that is where the bullying started”. The book blurb mentions the “body image” theme – from being nicknamed “tadpole” by a rival athlete to a “fatgate” media furore. The only jacket reference to colour is that the author “lives in Sheffield with Andy and their chocolate labrador, Myla”. She does write of how ‘Dad’s Jamaican roots’ had their strongest influence in the family kitchen, where he loves to cook ackee and saltfish, ‘the national dish’. (As it happens, Greg Rutherford has said more in public about facing overt prejudice than Ennis, telling newspapers that “being ginger is the bane of my life. The stick you get is unbelieveable. I’ve endured years of it”).

Ennis’ gold medal was the only one of London 2012 presented by Sebastian Coe. “It had a particular resonance for me because of Sheffield, of course”, writes Coe. He doesn’t mention that they are both mixed race, though he gives family heritage more space in his biography than Ennis does in hers. Coe’s grandmother was persuaded by her parents, before her 21st birthday, to call off an engagement to Ravi Shankar’s older brother, Uday; but, aged 22, she married a Punjabi law student in St Pancras Registry Office in 1927. Coe’s Anglo-Indian mother lived mainly in India until the age of eight. ‘I hoped to find out more about my Indian heritage’, he writes, but the lack of Punjabi public records defeated even the BBC ‘Who Do You Think You Are?’ research team.

Few people know that Coe is mixed race. Many would be surprised by how strongly Ryan Giggs talks about identifying with the black heritage of his Welsh-Sierra Leonean father: ‘It’s your roots. It’s what you are’, he has said.

It is fascinating that the British public fell in love with Jessica Ennis this Olympic year without ever quite sorting out what her ethnic identity is. People chose her, from the strongest imaginable field, as the Olympic athlete who made us proudest to be British, pipping Farah into second place ahead of Bradley Wiggins and Chris Hoy. Yet most people remain unable to recognise the ethnic identity of the “face of the Games”. 44% of people do recognise her as mixed race, in the Britain Thinks poll for British Future, while 6% think of her as black, and five times as many believe she is white.

That may make Jessica Ennis Britain’s first post-racial superstar sportswoman. A broadly post-racial identity is not, of course, the only route to integration, nor probably the most common one, but it is not any less ‘authentic’ than other approaches to race and personal identity either.

A good test of integration is difference doesn’t always have to be the plot point anymore. The first gay character to feature in a mainstream soap opera was bound to have an HIV/Aids storyline. When an Asian family moves in, the daughter will begin to argue with her authoritarian father over his plans for her arranged marriage.

Inclusion, at first, comes with visibility drawn to the difference but, eventually, Asian and gay people pop up in Eastenders simply because you might expect to find them in East London.

The integration we don’t notice anymore might be one of the best tests of whether it has truly become “integral”.

Pioneer achievements are celebrated, especially while they are unusual, but cease to be so as they become the new normal. The mere fact of a black Italian centre-forward generates headlines in a way that is now unthinkable in England.

So agonised debates about why ‘they’ don’t want to become ‘us’ may continue, yet fail to notice that some of the new ‘us’ did, because those who are ‘us’ don’t feel like they were ever ‘them’ anyway.

Perhaps, just occasionally, we should stop to notice what we take for granted, even if we should not want to notice it too much.

Jessica Ennis never asked to be the poster girl of the Olympic Games, nor the face of the Britain we have become either. But our sportswoman of the year tells an important census story of our changing society too.

Britain’s Olympic heroine was born in Sheffield in 1986. 23 years earlier, her father had come to Britain from Jamaica as a 12 year old, following his parents who had emigrated two years earlier to look for work. He met her mother, who had grown up in rural Derbyshire. When her parents met in the mid-1980s, the British Social Attitudes surveys showed that 50% of the public were opposed to marriages across ethnic lines, with 40% still saying so in the 1990s. British Future’s new poll shows that discomfort with mixed race marriages has now fallen to 15% in 2012.

Mixed Britain has especially become a lived reality for the under 30s, Britain’s most tolerant generation. One in four of the over 65s still say that they would be uncomfortable about a child or grandchild marrying somebody from a different race, but that falls to one in twenty of those under 25. It ranked last out of ten as a possible source of concern, with even worries about the idea of marrying somebody much richer being slightly stronger among the youngest group.

Today’s census results will show that those from mixed race backgrounds are among the fastest growing groups in the population. Around a million Britons will have ticked the census box as mixed race – and that is only half the story of the rapid growth of mixed Britain. Twice as many people have ethnically mixed parentage – but over half of them choose other census categories, such as black or white.

The Jessica Ennis generation can stake a strong claim to have won the race against prejudice. They are much more likely to be mixed race themselves, with one in ten children growing up with parents from different backgrounds; ever more likely to form mixed race relationships themselves; and much less likely to think there is any big deal about that anyway.

Perhaps that is worth noticing after all.

This article was first published by Open Democracy. View it here.