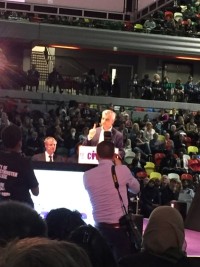 He will of course want to be more than just a ‘Muslim Mayor’. London will want to hear him champion a city where Jews, Christians, Muslims and people of all faiths and none feel equally at home. But it is still of real importance that, at a time like this, Londoners elected a British Muslim to be Mayor of a city of London’s global significance.

It confirms that voters are more interested in a Mayoral candidate’s character than their faith – and that party colours are much more important than skin colour in determining votes too. A controversial and personalised campaign against Khan saw concerns that young British Muslims could be put off standing for political office – but the fact that London’s voters responded by sending Sadiq Khan to City Hall as Mayor should now send a positive message: that every role in our city can be open to every talent from every background.

And London’s choice of Mayor Khan sends a message that will matter beyond Britain too. London’s democratic choice is a setback for the “clash of civilisations” narrative and those who hanker for it on any side. Khan’s election powerfully disrupts the claim of Islamist extremists whose propaganda depends on proving that Muslims will never be accepted as full and equal citizens in Western society. It can also challenge those populist voices like Republican Donald Trump, who fall into that trap too with their message that Muslims in the West can “never be us”.

Yet Sadiq Khan should surely not be content to be merely a symbol of integration. He must now use the powers of his new office to be the practical champion of integration that London needs.

Here are five practical ways that he can do that during his first 100 days in office.

1. Repair the Damage
We heard too much of the politics of division during the London campaign.  Former Mayor Ken Livingstone’s offensive gibberish about Hitler and Zionism has exacerbated concern that too many are in denial about a virulent strain of anti-semitism within the left.

Most of Britain’s 280,000 Jews live in Greater London – so the new Mayor should ensure that they feel they will have no stronger champion in British politics, one determined to eradicate anti-semitism from our public life. The Mayor should also make a significant contribution to building the contact across minority groups – particularly between Muslim and Jewish citizens in London – that can make the most difference in breaking down casual prejudice and building strong alliances against every form of intolerance.

The task of repairing the damage from the campaign trail does not fall to Sadiq Khan alone. That task falls to the Prime Minister too, who should acknowledge that his party got the content and the tone of its campaign wrong so as to move decisively on from that campaign to build a powerful partnership with London’s new Mayor. Mayor Khan must now become one of this Government’s most important allies in challenging extremism and promoting integration in Britain.

The London Conservatives have lessons to learn from a losing campaign – and will need to learn them before they try to win City Hall back in 2020. Under David Cameron, the party has made very significant advances in diversifying the party and reaching out to ethnic minority voters too. But most of the civic groups who have engaged with the Conservative outreach effort saw the party’s London 2016 campaign as a significant step backwards. It is a view that many Conservatives share privately. But this is not simply a question of party reputation and strategy. The challenges of tackling extremism and integration are much bigger than party politics.

Prime Minister Cameron has also talked about his belief that Britain is becoming the most confident multi-ethnic and multi-faith democracy on the planet. Though they belong to competing political parties, as a national leader the Prime Minister should recognise how the election of Mayor Sadiq Khan marks an important further step in that journey.

2. Make Citizenship Matter
“This has been the best night of this election campaign”, Khan told the London Citizens Assembly, as 6,000 Londoners crammed into the Copperbox arena at the Olympic Park. Both major candidates had found one thing to agree with on the campaign trail – that this inspiring evening captured civic political engagement at its best. The point of the event was to secure candidates’ commitments to implement proposals in a manifesto that London citizens had jointly developed.

Goldsmith backed the proposal to appoint a Deputy Mayor for Citizenship and Integration, jointly developed by London Citizens and British Future, while Khan’s only reason for demurring was that he wanted to take personal responsibility for leading on this issue.

“I personally – not a Deputy Mayor – I personally will work to promote citizenship and ensure that all are able to participate in our democracy and our wider community”, he said.

The new Mayor’s commitment to personally lead this integration crusade is welcome.

3. Promote universal English fluency in London
A shared and common language is an essential foundation of integration – the passport to full economic, social and democratic participation in the life of the city and the country. It helps us to secure a job, talk to our neighbours – and come together for common causes. While nine out of ten migrants to London speak good English, that still leaves 235,000 London residents of working age who do not speak the language fluently.

The Mayor should promote the goal of universal English fluency in London – that everybody who has been in the city for a year should know English or be learning it – and the new Office for Citizenship and Integration should build an effective partnerships strategy to deepen understanding of the barriers and support practical plans to overcome them.

Though turnout rose to over 45%, we should not be satisfied when most Londoners did not vote to choose their Mayor.

Half a million Londoners will turn 18 during the Mayor’s four year term of office. Too little is done to mark that ‘rite of passage’ – especially since British Future’s “Voice of a Generation” research into first-time voters found that one key reason why young people feel detached from formal political structures is that there is a generational expectation of being actively engaged and invited to participate, rather than being expected to seek out opportunities to do so.

The Mayor and a new office of citizenship should work with London boroughs to pursue a goal that nearly every new citizen entering adulthood should register to vote – reporting annually on registration rates across the boroughs to identify the barriers and spread best practice in achieving this.

5. Fly the flag for an inclusive England

An increasingly diverse London needs the moments to bring us together. Mayor Khan should make sure that the England flag flies proudly above City Hall throughout Euro 2016 – at least while England stay in the tournament – as a symbol of London’s pride in being an English, British and global city. It would be a powerful way to invite Londoners to back the #WeAreAllEngland campaign – which launches next Tuesday – with groups from every faith and ethnic background celebrating an inclusive and shared sense of national pride in the England that we all belong to.

So we welcome Mayor Khan to City Hall. During the campaign trail, at that hustings event at the Olympic Park, both candidates promised to maintain the relationship with Citizens UK and work alongside them to implement the proposals to which they had committed. Those citizen activists, in turn, promised to hold the winner to account on his promises. Mayor Khan needs to be more than a symbol of integration – he now needs to put his words into action.