The Liberal case for staying nuanced on immigration

Lib Dem leader Tim Farron made an impassioned defence of liberal values on refugee protection today in his address to the party’s conference in Bournemouth, writes Steve Ballinger, as he drew attention to Britain’s proud tradition of offering protection to those most in need while mounting a stinging criticism of PM David Cameron’s handling of the current refugee crisis.

It was a strong, impassioned speech, most commentators agreed – one that would play well with the core Lib Dem vote. But would it resonate with the majority, who had turned away from the party in droves? The Guardian’s Rafael Behr suggested that those who might now criticise Farron as being out of touch with mainstream public opinion had failed to grasp his strategy – one of making a strong pitch for the most liberal voters who take pride in being considerably more moderate than most on immigration.

But is a ‘core vote’ strategy, seeking to appeal to only the most liberal voters, good politics? And is it the best way to build public confidence in Britain’s ability to manage the current, high levels of immigration to Britain? Probably not.

Polling by Survation for British Future, published today in “The politics of immigration – the surprising lessons of the 2015 General Election and what they mean for new party leaders” suggests that the Lib Dems are the least likely of all parties to have anything resembling a ‘core vote’. 70% of those who voted Lib Dem in 2015 suggested they might vote for a different party in future, compared with less than half of Labour, Conservative or SNP voters. Only 13% of Lib Dem voters were confident they would not be changing their mind in future. 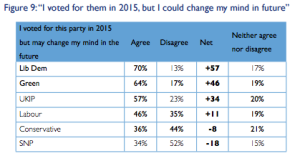 The party was also less successful than they had hoped in securing support from voters who shared the party’s liberal outlook on questions like Europe and immigration. The Lib Dems won around 12% of those in the pro-migration ‘liberal minority’, not much higher than their 10% share of the ‘anxious middle’ who hold more mixed views on immigration. While it’s not surprising that only 2% of voters with strongly anti-migration views voted Lib Dem, pro-migration voters were twice as likely to vote Conservative, and almost four times as likely to vote Labour, than to support the Lib Dems.

Why didn’t the Lib Dems achieve a better result with the most liberal voters? In 2015, voters who shared the party’s liberal views on identity issues strongly opposed other aspects of their record in government. Age was a particularly important factor here: the party did especially badly with students and first-time voters, polling just 4% of 18-22 year olds. This reflects a dramatic reversal of what had happened in 2010, when the Lib Dems won 30% of votes from 18-24-year-olds, according to Ipsos MORI’s “How Britain Voted” study.

Shortly before he was confirmed as party leader earlier this summer, Tim Farron told a British Future identity hustings that he intended to take an “un-nuanced” position in favour of immigration, arguing that the case for the Lib Dems being unambiguously positive about immigration, even if most people don’t agree with them, was not just one of principle but of electoral pragmatism too.

Becoming the ‘unpopular purist party’, however, would be far too unambitious an agenda for liberals on immigration.

Their task should be to seek to extend support and to make a liberal case that most people might respond to. The party should look to build up public confidence that the UK can manage high levels of immigration well, in a way that is both welcoming to those who come to contribute to our economy and society, and committed to a fair deal for existing citizens too – as Andrew Stunnell’s immigration review for the party concluded.

Farron should acknowledge that there is a strong liberal case for ensuring that we have an immigration system that is both effective and humane.

He should continue to speak up for the principle of protecting and welcoming refugees but in a way that both mobilises liberal activism and appeals more broadly to the majority instinct that protecting those in most need is a proud tradition.

A party that is broadly supportive of the benefits of economic migration should also prioritise practical measures to handle the local pressures of immigration effectively. Lib Dems could support the proposal to directly link levels of local funding for public services to population flows, so that the tax contributions made by migrants to the UK are linked to the provision of local services where they are most needed.

Finally, while Liberal Democrats have been champions of the cultural benefits of diversity, they have paid less attention to constructing a liberal account of what makes integration work, including the promotion of an inclusive sense of national identity.

The Liberal Democrats may face a long road to political recovery after the shock of the 2015 general election. But there are opportunities not just in the short-to-medium term if Labour heads significantly leftwards, but also longer-term in a society which is, over the generations, becoming gradually more rather than less liberal. A confident, broad and popular liberal case would set itself the challenge of preaching beyond the liberal tribe in Britain today. To do that, the party should recognise that it is possible to be principled, liberal and nuanced on immigration.