A new report from Refugee Action highlights the difficulties that refugees face in accessing the English language classes that they need to rebuild their lives in the UK. 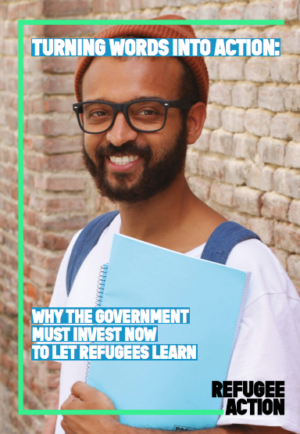 Fluency in English is one of the most important factors underpinning integration. Migrants and refugees who speak English find it easier to obtain work, communicate with neighbours and colleagues and make friends outside their linguistic community. Such social contact helps dispel misunderstandings that new arrivals and long-settled residents may have about each other and contributes to greater trust. Despite the importance of English, a new report from Refugee Action highlights the difficulties that refugees face in accessing the English language classes that they need to rebuild their lives in the UK.

Although some adult refugees arrive in the UK with good or fluent English, significant numbers do not. For them, integration involves learning a new language, which they do through contact with English speakers, informal language classes offered by volunteers, as well as formal language classes organised by colleges and local authority adult education services.

A number of factors influence migrants’ progress learning a new language, including their prior education experience, confidence, age and social contact with English speakers. But research shows that motivation is by far the most important factor which determines language acquisition. The encouragement that a trained teacher provides is key to keeping up the momentum, particularly for those with less social contact outside their family and community.  Ideally, provision should extend to 8-10 hours’ formal tuition

But as Refugee Action’s report shows, access to formal classes is patchy. There is a postcode lottery of provision and in some parts of the UK there are simply not enough classes.

Adult education policy is a devolved power; as well as the Westminster Government, the administrations in Cardiff and Edinburgh make policy. Some adults can study for free or at very low cost – an arrangement known as concessionary fees.  In England and Northern Ireland, however, asylum-seekers are only allowed to enrol at a concessionary fee after they have fulfilled six months’ legal residence. There are also restrictions placed on those who are not actively looking for work.  These rules mean that asylum-seekers cannot study for many months and may start to rely on relatives and friends to interpret. Once in place, such survival strategies are hard to shift and can act as a barrier to learning.

Refugee Action is calling for these regulations to change and for policy in England and Northern Ireland to come in line with Scotland and Wales, where asylum-seekers are allowed to study for free as soon as they arrive in the UK.

Over the last year, there have been some positive indications that the Government’s approach to English language provision is changing. England will have its first English language strategy this autumn. The Adult Education Budget will also be devolved to the Greater London Authority and six combined authorities this September, enabling seven city mayors to take action to fill gaps in provision.

Those who are campaigning for better English language provision have been encouraged by Sajid Javid, a candidate for the leadership of the Conservative Party (and hence for Prime Minister). As Minister for Housing, Communities and Local Government and now Home Secretary, he has taken forward much of the Government’s work on integration. In his introduction to the 2018 Integration Green Paper, Javid wrote about the experiences of interpreting for his Pakistan-born mother who for more than a decade after arriving in the UK barely spoke a word of English. At a British Future event last week, Sajid Javid reiterated his commitment to improving English language provision. “If there was one thing I could do to have better integration it would be to focus on English language. I would put rockets under that programme, in fact I would change the whole programme and make it as easy as possible to reach out to people. Britain is their home and we should help them to learn English.”

Sajid Javid can be confident that the majority of voters agree with his views. Findings from the National Conversation on Immigration, the largest-ever public consultation on this subject, showed that 88% of adults agree that migrants should learn English in order to be successful members of society. The National Conversation survey suggested that 65% of people believed it was important that the Government provided classes to those who need them, with this support fairly consistent across different sectors of society and political persuasions. Whatever the outcome of the leadership election, it is important that the next Prime Minister prioritises English language provision.