New research for British Future's 'Jubilee Britain' report finds that the Jubilee has potential to bridge divides and bring people together. But a 'Bridging monarchy' will need to broaden its appeal, particularly to young people, ethnic minorities and across the nations of the UK, if it is to stay relevant in the future.

The Jubilee celebrations in a few weeks’ time have the reach and recognition to help bridge divides in the UK, according to new Focaldata research for British Future – but the monarchy still has work to do in broadening its appeal to young people, ethnic minorities and people in Scotland.

Major national events do have the power to bring people together, and in a year that also includes the Commonwealth Games, Women’s Euros and a winter World Cup, it is still the Queen’s Platinum Jubilee in June that seems to have captured the public’s attention. Two-thirds of people in Britain say they are interested in the Jubilee and a majority feel it could be a moment that brings people together.

Things look a little different in Scotland, however, where only 48% of people are interested in the Jubilee, with 49% saying they are not. More Scots (52%) are interested in the World Cup in December – even though the Scottish team has yet to qualify. Scots, alongside young people and those from an ethnic minority background, are also all less likely to feel the Jubilee can help bridge divides. 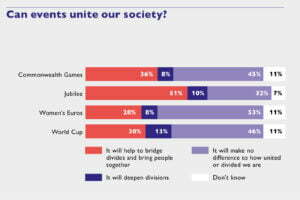 The Jubilee offers a rare opportunity to examine how our society has changed and what has remained constant over the last seven decades. British Future’s new Jubilee Britain report explores where the public is on some of the key issues facing Britain in 2022 and beyond. After ten turbulent years since the last Jubilee – encompassing Brexit, Covid, three elections and two referendums and now a major war in Europe – the new research looks at the state of the nation in 2022 and asks how much we have changed as a society in this time.

It finds that six in ten people in Britain (58%) still want to keep the monarchy, versus a quarter (25%) who feel the end of the queen’s reign would be the right time to move on and become a republic. The vast majority, 85% of the public, expect that Britain will still have a monarchy in ten years’ time.

Among those aged 16-18, only 36% agree that we should keep the monarchy for the foreseeable future, though just 27% say they would prefer a republic. 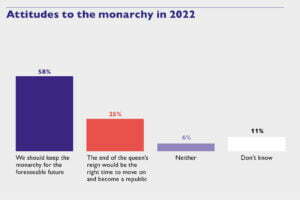 So the monarchy will be wise to resist efforts, from those who feel they are its most vocal champions, to turn it into ammunition in the so-called ‘culture wars’, a symbol of tradition to see off emerging ‘woke’ generations.

The crown’s bridging challenge is to show how it can bring us together. How can it transcend our political tribes, extend its reach across nations and regions, generations and ethnic groups, given that modern Britain is more self-consciously multinational than a generation ago, and more fractious and fragmented than any of us want?

Broadening the monarchy’s appeal would be key if it is to play a role in bridging Britain’s divides, and most of the public (52%) do feel that it can play this role. Nearly half (47%) of ethnic minority respondents agree that the monarchy can play a part in bridging divides. 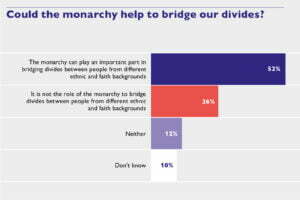 The monarchy has engaged more proactively with diversity abroad, in the Commonwealth, than at home here in Britain. Birmingham hosting the Commonwealth Games is an ideal moment to start closing that gap. Reflecting on how powerful a symbolic role the monarchy played in reconciliation in Ireland, north and south, the royals should not be too daunted to engage with the sharper edges of the history of race and empire, as well as the shared sacrifices we mark every Remembrance Sunday.

Challenges for the monarchy are reflected, too, in findings on how people perceive other symbols of national identity. While the Union Jack is still associated mostly with the Monarchy (72%) Team GB (71%), the armed forces (68%) and pride and patriotism (65%), a quarter of people (25%) associate it with racism and extremism – an increase of 10 points since 2012. The meaning of England’s flag is more contested still: while 60% of the public, and 62% of minority groups, see it as representing pride and patriotism, for a third of the public (32%) it represents racism and extremism, including for 43% of ethnic minorities.

Most people in Britain identify with more than one flag – and with more than one national identity too. There is a much wider consciousness that being British is the shared civic identity of a multi-national state than a generation ago. But our new findings also capture why conversations about British identity and its symbols can be heard differently across the different nations and demographics of the UK.

The Jubilee Britain report is published on Wednesday 18 May to mark British Future’s 10th birthday. Since our launch in 2012 we have developed a uniquely detailed understanding of public attitudes, earning a position as a thought leader on issues of identity and migration, integration and race. An accompanying publication, Finding common ground, looks back at our first ten years and sets out the organisation’s vision for the decade to come.