Prime Minister David Cameron has set out new proposals to increase integration and tackle discrimination against Muslim women, including increased investment in English language classes for migrants and measures to challenge gender segregation.

The following extracts from British Future’s pamphlet How to talk about immigration examine in some detail the importance of integration, and specific integration challenges facing British Muslims.

What we feel about change is highly subjective. If you find change deeply unsettling, you will always struggle to persuade somebody who embraces change of your point of view, or vice versa. But we should still be able to agree that we do have a joint responsibility to make our shared society work. Only a fringe minority would still now disagree that the diversity of modern Britain is a settled and irreversible fact. Most of us think it is important to identify how our common citizenship should work, if we want a shared society, not a divided, polarised and segregated one.

Integration is partly a question of what we expect from migrants. It concerns their responsibilities and what reciprocal rights they can expect, in return, from the society they join. But integration is not only a question for migrants, or for their children and grandchildren to navigate as first, second or third generation Britons. These have to be debates about what identity and belonging mean for all of us if we are all going to have a voice and a stake in how we make the ‘new us’ work. 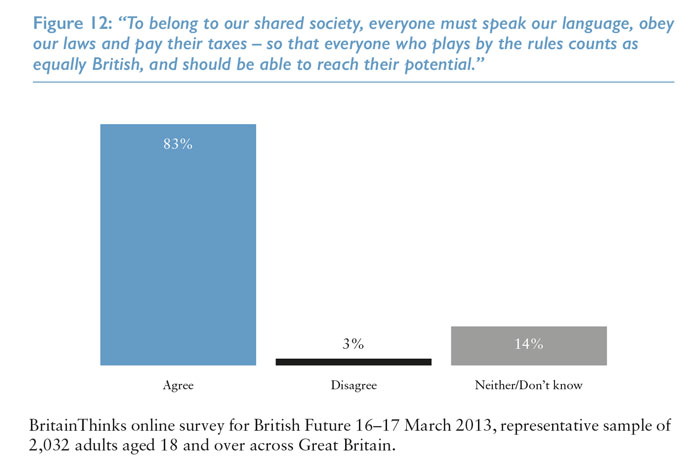 “To belong to our shared society, everyone must speak our language, obey our laws and pay their taxes – so that everyone who plays by the rules counts as equally British, and should be able to reach their potential.” In fact the integration deal that we recommend here has particularly broad appeal to the British public, with 83 per cent approval, and just 3 per cent opposition.

It is when integration works well that Britain benefits most from migration – when people settle here and become invested in the country by starting a family, setting up a businesses and becoming part of their local community. Migration works when migrants and their children get to be fully part of the society that they have joined.

‘Do British Muslims even want to integrate on similar terms that people of other faiths thought were a pretty fair deal?’ wonders the viewer of the six o’clock news, as it crosses from a row over faith in Birmingham schools to British-born teenagers heading off to fight in Syria.

‘Will Britain ever just accept me for who I am, on equal terms with everyone else?’, asks the young British Muslim undergraduate, scanning the tabloid headlines as the latest controversy about halal meat in pizzas hits the front pages.

These difficult conversations are necessary ones for integration and shared citizenship. If questions of Muslim integration are often central to our integration debates, they may feel quite different to the two participants in the above conversation. Both voices might want the answer to be ‘yes’ – yet they might hear the other voice seeming to say ‘no’.

While these debates about the experience of second and third generation Britons are not really about immigration anymore, getting integration right is a crucial ‘deal-breaker’ issue for cultural sceptics on immigration.

Britain’s ‘Anxious Middle’ is certainly very anxious about Muslim integration. And there is an anxious middle among British Muslim citizens too – with similar concerns about jobs and opportunities in Britain today, and worries about the impact on their children’s life chances if British Muslims face more prejudice than any other minority.

These findings exemplify Sayeeda Warsi’s claim that anti-Muslim discourse can ‘pass the dinner table test’ in a way that discourse about other minorities would not. They suggest a contrast between a warmth towards fellow citizens who are Muslim – especially if we meet each other as classmates or parents, colleagues and friends – and anxiety about the group, especially likely to be perceived as a monolithic bloc making unreasonable demands by those who have little or no personal contact with British Muslims.

Helping British Muslims to feel as much a part of British society as other ethnic and faith minorities, while getting the worried-but-not-prejudiced members of the mainstream non-Muslim public to a similar place, should be the top priority for those committed to inclusive citizenship and tackling prejudice in British society today. But that might mean shifting the approach to Muslim integration that we now have.

Firstly, we need to be tough on anti-Muslim prejudice without shutting down legitimate debate

Prejudice against Britain’s Muslim community undoubtedly exists and should be challenged. But it should still be possible to debate and critique cultural, political or theological claims that are made by some in the name of Islam, without being prejudiced against Muslims – as long as you keep prejudice out of the debate. Shutting down reasonable critiques with unfair claims of ‘Islamophobia’ provides a space within which genuine prejudice can fester; it also reduces the potency of legitimate rebuttal when someone does overstep the mark and express prejudiced views against Muslims. Any successful anti-prejudice strategy should make clear the boundaries between prejudice and legitimate debate.

Secondly, more efforts need to reach the anxious mainstream majority, not just those who are already onside

Efforts to tackle anti-Muslim prejudice should not be directed at those already onside: young people, the better-educated and those who live in bigger cities or who have more personal contact with their Muslim fellow citizens. It is good to entrench that positive shift by engaging the next generation – but the kids are alright. Anti-prejudice efforts need to reach more anxious audiences: not those with the most toxic anti-Muslim views but those ‘moderate majority’ citizens who are anxious about Muslim integration while holding benign views of other minorities. Effective anti-prejudice strategies should engage middle Britain and ‘middle Muslim Britain’ too, including by bringing about new contact between them. A joint jumble sale by the Women’s Institute and the local mosque might do more to work out how we live together than any number of postgraduate race relations seminars.

Thirdly, Muslim integration cannot be addressed in isolation; it is fundamentally a question of shared citizenship

While there are distinct challenges relating to Muslim integration and attitudes to British Muslims, tackling the issue in isolation is unlikely to be effective. One commentator responded to Rotherham by calling for a Royal Commission on Muslim integration: that would be precisely the wrong approach. The answer to the challenge of Muslim integration is to define the common ground of equal and shared citizenship across all groups and individuals in our society.

There is a clear analogy with debates about Catholic integration, over a much longer period. The IRA bombing campaign during the Troubles undoubtedly impacted on the Irish in Britain in the 1970s and 1980s. In 2014, British Muslims face similar questions. Another group may do so in thirty years time. The question of Muslim integration can not be for Muslims alone: it is up to all of us to find the common ground of shared citizenship that can bring people together.

We should sustain our strong commitment to freedom of religion and belief, combined with respect for the views of others. But there is public concern about those demands that don’t seem to be about ‘fairness’, but which instead seem to “carve out” demands or sound like an attempt to live in a different country within British society. Such demands will undermine the idea of a shared set of rules we all must observe. Faith schools have a legitimate role, as long as they commit to core values of citizenship and cohesion: those requirements must be equally applied across different faith backgrounds.

A proposal: Make English language the keystone to integration

Being able to speak English is the key to integration and a passport to full economic, social and democratic participation in our society.

Governments should aim to achieve universal fluency in English right across the country, and work with partners to identify the most effective ways to reach those who need help to achieve proficiency in the English language.

The government should make English language lessons free at the point of use, establishing a loan scheme to pay back the cost of tuition, as David Goodhart, of the Demos thinktank, has proposed.

School pupils who arrive in the classroom without English fluency are currently enjoying strong success in the school system, particularly in London, and are contributing to a general rise of attainment levels despite this additional challenge. Greater efforts should be made to engage parents too. Health services could have an important outreach role for some of those who may not often come into contact with the state: for example, women with poor language fluency could be offered advice and support through pregnancy services and post-natal midwife care, making this as routine a practice as advice on healthy eating or information on stopping smoking, and building on the motivation of new parents to have the capacity to be involved with their children’s education.

Here, the universities, who are significant beneficiaries of immigration, could be asked to contribute to achieving this goal. The Government should consult our leading universities to find practical ways to make some of their world-class facilities available – outside term-time, and at some weekends – as a practical way to assist local English language teaching projects. This could be combined with high-profile projects to actively encourage recent graduates, current students and university staff to donate time to literacy projects, for example as mentors or voluntary ESOL assistants.

This positive contribution to successful integration would be an important symbolic and practical example of how institutions that benefit culturally and economically from immigration can help the towns and cities of which they are a part to manage the challenges of making it work. It would also give citizens themselves a positive way to contribute to integration, promoting greater contact between communities. Engaging universities in how they can practically support such English language initiatives could be combined with a corresponding government commitment to support universities to actively increase enrolment of foreign students, an important source of income for universities and the local economy around them.